It’s got a past that stretches back to the beginnings of America and a future that’s looking fine.

The Brooklyn Navy Yard is busting out all over.

Its expansion is being funded by big real estate players like Mort Zuckerman’s Boston Properties and the Rudin family as well as the city, which owns the 300-acre site.

We are eternally intrigued by the Navy Yard, which was established in 1801 by President John Adams. Some of the nation’s finest naval ships were built there, including the USS Ohio, launched in 1820, and the USS Arizona, which was sunk during the Dec. 7, 1941 Japanese attack on Pearl Harbor.

The former Naval shipbuilding facility’s present incarnation as an industrial park is fascinating, too. Under the management of the nonprofit Brooklyn Navy Yard Development Corp. (BNYDC), it has become a place where people make oodles of interesting things, from bomb-proof underwear (at Crye Precision) to hit movies and TV shows (at Steiner Studios).

Recently, news surfaced about a planned 675,000-square-foot building for tech and creative businesses that Zuckerman’s real estate investment trust, Rudin Development and a huge tenant, WeWork, will construct in conjunction with BNYDC.

Seeing the renderings for Dock 72 at the Brooklyn Navy Yard, as the project is called, made us want to visit the historic complex on the shoreline of Wallabout Bay. It had been far too long since we last stepped inside its gates.

We asked BNYDC’s president and CEO, David Ehrenberg, to show us and our photographer colleague Rob Abruzzese the Ten Coolest Things at the Navy Yard.

We’re lucky Ehrenberg said yes. So many innovative products are made there, and there are so many extraordinary reminders of Brooklyn’s history, that we would have had a hard time narrowing our own list to ten things.

First, here are some details about Ehrenberg —  who was a Fulbright Fellow in Zimbabwe and earned dual master’s degrees in public policy and urban planning at Princeton’s Woodrow Wilson School.

He told us that being BNYDC’s CEO is a “dream job” because it combines large-scale job creation and an intense focus on job placement for community residents, especially those living in nearby New York City Housing Authority complexes.

Ehrenberg is pleased to be working solely in Brooklyn again. The first time around, the Windsor Terrace resident was the coordinator of a South Brooklyn Legal Services micro-enterprise program.

Before he was appointed to head BNYDC in summer 2013, Ehrenberg, 38, had been a city Economic Development Corp. executive vice president with projects in various boroughs. One of his particularly memorable accomplishments was landing a developer to transform the shuttered Loew’s Kings Theatre in Flatbush into a stunning performing arts center. The restored theatre reopened in February. The employment center is Ehrenberg’s pick for the Number One Coolest Thing in the Navy Yard.

“This is where we convert economic activity into economic opportunity,” he said.

The number of jobs at the fully occupied 3.5 million-square-foot industrial park has grown to more than 7,000 from 3,600 in 2001. The upcoming addition of more than 2 million square feet of space to the complex is expected to increase the number of jobs to 15,000 by 2020. When you stand next to this 22,500-pound steel anchor, you feel so tiny.

This mammoth remnant of Naval history came from the Brooklyn-built USS Austin, which was commissioned into the Navy in 1965. During its 40 years afloat, it served as a recovery ship for three Apollo space missions and delivered humanitarian aid to homeless Kurds in 1991 in the Persian Gulf War. The anchor takes up so much of the lobby of Building 92 that you might not notice a slim lamp post over along one wall. The street light, powered by solar panels and wind turbines, was manufactured by  a Navy Yard tenant, Duggal.

“You often see this juxtaposition of history and design, technology and modern manufacturing at the Navy Yard,” Ehrenberg said. An interactive map in the museum the Navy Yard opened in 2011 is popular with kids on school tours.

In the recently ended school year, 4,000 of them visited the museum in Building 92 — which introduced them to a slice of Brooklyn that was off limits to the general public when their parents were children.

“I grew up in the South Slope and had no idea about the rich, amazing history of the Navy Yard,” Ehrenberg explained. “Back then, it was surrounded by razor wire, and government signs said ‘Keep Out.’

“The museum is our way to celebrate the fact that the Navy Yard was the industrial heart of Brooklyn for so many generations. In the ’60s and ’70s, that legacy was largely forgotten.” Dry Dock 1 was constructed in 1851 for Naval shipbuilders.

It is still in use right now. Navy Yard tenant GMD Enterprises repairs, maintains and upgrades boats there.

“It’s our purest link to the history of the Yard,” Ehrenberg said. “It produces high-quality manufacturing jobs that lead to a middle-class life.” In bygone days, Building 128 was a Navy machine shop. Its makeover into the Green Manufacturing Center is nearly finished.

New Lab will occupy a wing of the center. That’s a cool thing because it will be “a small-business incubator purely for product designers and manufacturers,” Ehrenberg said. It’s slated to open in 2016.

It will have $6 million worth of prototyping machines for the small businesses to use.

“This will be a breeding ground for the next generation of product manufacturers,” he said. 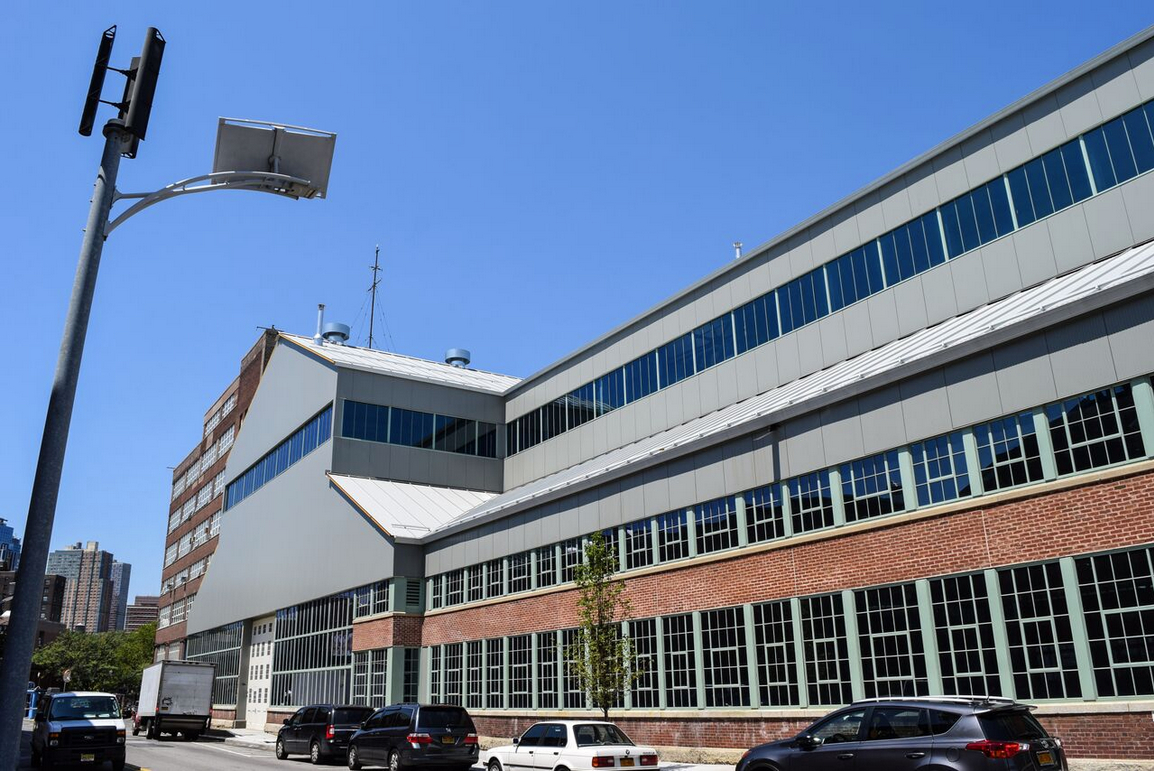 These folks make tools that are used on Mars.

How often does a real estate columnist get to write a sentence like that?

Some of them enable Mars Rovers to probe the interiors of Martian rocks or investigate whether Mars’ environmental conditions could support microbial life. Up on the roof of Building 3, sunflowers greet the morning light.

So do zinnias, strawberries and a dizzying array of vegetables growing in an urban farm called Brooklyn Grange.

What’s so cool about this 65,000-square-foot commercial garden in the sky?

“It uses an otherwise unusable roof — and diverts 1 million gallons of storm water per year from the sewers,” Ehrenberg said. “It keeps sewage from pouring into the East River.” “It really exemplifies as a company everything the Navy Yard is about,” Ehrenberg said. The makeover of Building 77 will add 1 million square feet of space to the Navy Yard.

Thanks to Ehrenberg, there’s funding to install windows throughout the property so workers on all 16 floors will be able to enjoy the views. That means terrific vistas of midtown skyscrapers, the new World Trade Center and Downtown Brooklyn’s towers.

Because Building 77 was largely a storage facility for supplies to stock war ships, it was constructed without windows — except at the top of the building, which housed the Naval High Command for the   North Atlantic Fleet during World War II.

By the way, floors 15 and 16 are on the leasing market through brokerage JLL at asking rents of just over $40 per square foot per year. There’s flexibility to trim the rent to $30-something per square foot depending on who the tenant is. An 1830s-vintage hospital perched on a picturesque hill looks like it belongs on a movie set. Isn’t that a coincidence?

The building, made of Tuckahoe marble, was America’s first Naval hospital. It’s in a cluster of nine historic buildings known as the Naval Annex, which mega-tenant Steiner Studios plans to transform into a media campus with more than 170,000 square feet of sound stages.

“It’s this completely hidden gem that nobody in Brooklyn knows exists,” Ehrenberg said.

There’s room on the long-unused property to build an underwater stage that will be filled with non-chlorinated water, which will be easy on actors’ eyes. 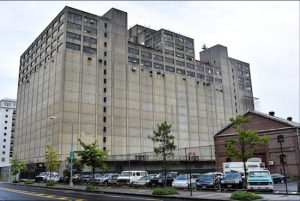