New York City Mayor Bill de Blasio walks to a memorial service for Eric Garner at the Mount Sinai United Christian Church in Staten Island on Tuesday, just short of a year after Garner died while being taken into custody by NYPD officers. A $5.9 million settlement in Garner's death, a black man who died after being placed in a white police officer's chokehold, was reached with the city this week, days before the anniversary of his death. AP Photo/Craig Ruttle
Share this:

The death of an unarmed black man who was held in a police chokehold wasn’t in vain, and could help change the relationship between police officers and the communities they patrol, Mayor Bill de Blasio said at a church service in honor of Eric Garner.

De Blasio spoke Tuesday night, the day after the city reached a $5.9 million settlement with Garner’s family over his July 2014 death. His family said they would continue pressing for federal civil rights charges.

De Blasio, who is white and is married to a black woman, spoke at the church the night of the grand jury decision not to indict the police officer. At that time, he connected personally to Garner’s death, speaking of how he talked to his biracial son about being careful in his dealings with police.

Those comments sparked outrage from police unions, who accused de Blasio of fostering an anti-police sentiment. When two officers were killed by a gunman in December, some officers turned their backs on the mayor at the funerals.

De Blasio made sure to be inclusive in his remarks on Tuesday.

“All lives matter,” he said, before explicitly saying that while it should be self-evident, it must be still said that “Black lives matter” and, after he praised the police, “Blue lives matter.”

The settlement came nearly a year after the 43-year-old Garner died, having repeatedly pleaded “I can’t breathe!” as Officer Daniel Pantaleo took him to the ground with an arm around his neck. Garner lost consciousness and was pronounced dead later at a hospital.

He had refused to be handcuffed after being stopped on suspicion of selling loose, untaxed cigarettes on a Staten Island street.

The encounter, caught on an onlooker’s video, triggered protests. Coupled with police killings of unarmed black men elsewhere in recent months, Garner’s death became a flashpoint in a national debate about relations between police and minority communities.

“‘I can’t breathe’ spurred the national movement,” and it won’t end “until we change how policing goes,” the Rev. Al Sharpton said at a news conference Tuesday with Garner’s relatives.

“The victory will come when we get justice,” Eric Garner’s mother, Gwen Carr, said Tuesday.

“Justice,” added one of Garner’s children, Emerald Snipes, “is when somebody is held accountable for what they do.”

The city medical examiner found the police chokehold contributed to Garner’s death. But Pantaleo’s lawyer said the officer had used a permissible takedown maneuver known as a seatbelt — not a chokehold, banned under New York Police Department policy.

A grand jury declined to indict Pantaleo. The U.S. Justice Department and the U.S. attorney’s office in Brooklyn are investigating whether there’s evidence to warrant charges that the officer deliberately violated Garner’s civil rights. Such cases are rare after grand jury inaction or acquittal at the state level.

Police Commissioner William Bratton declined to comment Tuesday on the Garner case. The settlement came before any lawsuit was filed, though the family had filed notice of its intention to sue. The city did not admit any liability. 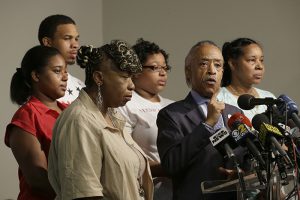