In this Oct. 21, 2013 file photo, Brooklyn native Jerry Weintraub, left, and Julia Roberts arrive at the 17th Annual Hollywood Film Awards Gala in Beverly Hills, Calif. Weintraub, the dynamic producer and manager who pushed the career of John Denver and produced such hit movies as "Nashville" and "Ocean's Eleven," died Monday of cardiac arrest in Santa Barbara, Calif. He was 77. Photo by John Shearer/Invision/AP, File
Share this:

Brooklyn native Jerry Weintraub, the dynamic producer and manager who pushed the career of John Denver and produced such hit movies as “Nashville” and “Ocean’s Eleven,” has died. He was 77.

Weintraub rose from talent agency mail room employee to top concert promoter — working with the likes of Elvis Presley and Frank Sinatra — and shaping Denver’s career before tackling the movie business starting in the 1970s.

Weintraub was born in 1937 in Brooklyn. He told People magazine in 1982 that his father, a successful gem salesman, said “there only two things are important at the end of the week: how much you owe the bank and how much you have in it.”

Weintraub got into show business when he was hired to work in the mail room of the William Morris Agency. He then was hired by Lew Wasserman at MCA, where he worked as advance man for the agency’s stars.

His first marriage resulted in a son, Michael, and ended in divorce. Weintraub married torch singer Jane Morgan in 1965 and they had three adopted children — Julie, Jamie and Jody. The pair separated but never divorced.

His attempt to found his own studio, Weintraub Entertainment Group, ended in bankruptcy. But his success as an independent producer spanned decades, from “Karate Kid” to 2013’s Emmy-winning Liberace drama “Behind the Candelabra,” a film he took to HBO after all the studios passed.

“Jerry was an American original, who earned his success by the sheer force of his instinct, drive, and larger-than-life personality,” said President George H.W. Bush, a longtime friend. “He had a passion for life, and throughout the ups and downs of his prolific career it was clear just how much he loved show business.”

“In the coming days there will be tributes, about our friend Jerry Weintraub,” said George Clooney, a star of the “Ocean’s” movies. “We’ll laugh at his great stories, and applaud his accomplishments. And in the years to come the stories and accomplishments will get better with age, just as Jerry would have wanted it. But not today. Today our friend died.”

A Brooklyn-born telephone-wielding impresario, Weintraub fashioned himself in the mold of Mike Todd, Cecil B. DeMille and P.T. Barnum. He titled his 2011 memoir, “When I Stop Talking, You’ll Know I’m Dead.” At the time, he joked he might write another: “Dead, But Still Talking.”

“If asked my philosophy, it would be simply this: Savor life, don’t press too hard, don’t worry too much. Or as the old-timers say, ‘Enjoy,'” he wrote. “But … I never could live by this philosophy and was, in fact, out working, hustling, trading, scheming, and making a buck as soon as I was old enough to leave my parents’ house.”

Weintraub left numerous projects behind. He’s the executive producer of the recently debuted HBO series “The Brink” and a producer on an upcoming remake of “Tarzan.”

Weintraub’s career as a promoter took a giant step in 1970 when after a lengthy courtship he persuaded Elvis Presley’s manager, Col. Tom Parker, to let him promote Presley concerts. It was at a time when Presley was beginning to do live shows after years of concentrating on movies. The relationship began with a small tour and continued for several years.

According to Peter Guralnick’s book “Careless Love: The Unmaking of Elvis Presley,” Parker kept control of the finances, but Weintraub and partner Tom Hulett introduced such improvements as a modern sound system for Presley. The experience helped propel Weintraub into the top ranks of promoters.

Around the same time as he was courting Presley’s camp, Weintraub saw Denver at a small Greenwich Village nightclub and was overwhelmed by the mountaineer’s easy manner. He took on Denver as a client.

“He would be a test case for all my theories on selling and packaging, for everything I had learned since I left home,” he said.

He told the Los Angeles Times in 1975 that he realized that Denver would appeal to older as well as younger listeners.

“They’ll listen to John — and let him into their homes on TV — because they feel comfortable with him,” Weintraub said. “John wants to reach everybody with his music.”

It was in 1975 that Denver bought Weintraub a Rolls-Royce as a thank-you gift and Weintraub said, “I couldn’t help thinking that it wasn’t too long ago that neither of us had bus fare.”

Weintraub produced a dozen Denver musical specials on television — winning an Emmy for one of them — and the hit 1977 movie “Oh, God!” It starred George Burns as God and Denver as the young grocer whom God approaches to spread his message.

He also set up successful tours for Sinatra and produced the television special “Sinatra — the Main Event,” as well as joint appearances with Denver. Among other musicians Weintraub worked with were Bob Dylan, Neil Diamond and the Beach Boys.

But his emphasis shifted to movies with 1975’s “Nashville,” Robert Altman’s acclaimed comedy-drama of American life as seen through the eyes of 24 characters in and around the country music business. It landed five Oscar nominations, including best picture.

In his memoir, Weintraub said he didn’t understand the complicated script, but he was eager to produce it because “Altman did, and it was Altman who was going to make the movie.”

He became chief of United Artists in 1985 but was ousted after just five months amid reports of disagreements with financier Kirk Kerkorian. He later reached a settlement with the company.

In 1987, he attempted to establish his own studio, Weintraub Entertainment Group. But it filed for Chapter 11 bankruptcy in 1990 after a string of flops including “My Stepmother Is an Alien.”

“I had, in a sense, promoted myself out of the job I always wanted, which was telling stories, producing,” he wrote in his book. “(The films) now were being made for me instead of by me.”

After the WEG bankruptcy, Weintraub continued producing, putting out such films as “Vegas Vacation” and “Ocean’s Eleven” and its starry sequels. He remade “The Karate Kid” in 2010, setting the project up in China and starring the young Jaden Smith, Will Smith’s son. Weintraub said he “questioned it 150,000 times” before backing it.

Starting in the 1980s, Weintraub became known as one of the Republican Party’s most loyal supporters in Hollywood. He had been close to Bush years before he became president, and in 1991, he hosted a star-studded party for the president at his Malibu home and played golf with Bush and former President Ronald Reagan. 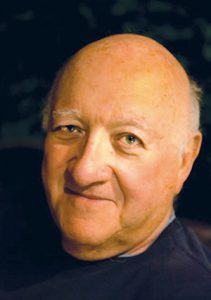