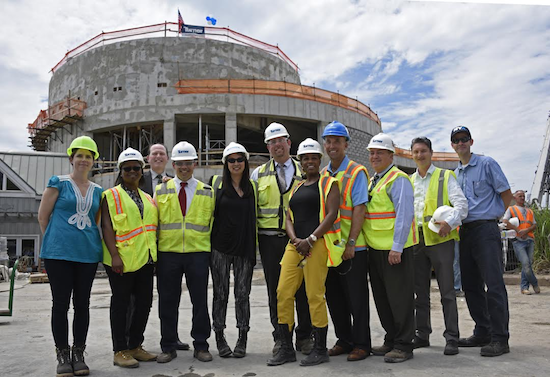 Wildlife Conservation Society and Turner Construction this past week celebrated the “topping out” of the construction of the exhibit by raising the U.S. flag on the top floor of the building. Photos: Julie Larsen Maher © WCS
Share this:

The construction of a new exhibit at the Wildlife Conservation Society (WCS) New York Aquarium, “Ocean Wonders: Sharks!” has risen high above the Coney Island Boardwalk.

WCS and Turner Construction celebrated this past week the “topping out” of the construction of the exhibit by raising the U.S. flag on the top floor of the building.

When the building opens in 2017, visitors on the top floor will see far across the Atlantic Ocean and up and down the Coney Island Boardwalk.

“‘Ocean Wonders: Sharks!’ will be a conservation, education and economic engine for Coney Island, and all of New York City,” said Jon Forrest Dohlin, WCS vice president and director of the New York Aquarium. “We are building a new attraction for Coney Island that will bring hundreds of thousands of new visitors to the area.”

Sue Chin, WCS vice president of planning and design and chief architect, added, “‘Ocean Wonders: Sharks!’ will be a new iconic structure in Coney Island that brings the ocean to the aquarium and the aquarium to the ocean. We are at a stage in the construction where visitors to Coney Island will clearly see there is a great new change coming to the community.”

The 57,500-square-foot exhibit will highlight the wonders of oceans across the globe and off the coast of New York. The building will be a new destination for tourists, students and local families interested in oceans and marine life.

The new exhibit will feature sharks, rays, sea turtles and thousands of schooling fish. It will hold more than 500,000 gallons of water in fully immersive and interactive exhibits and will forge connections between people and wildlife while highlighting the need for conservation of delicate marine ecosystems.

The exhibit will feature the work of the New York Seascape, the aquarium’s conservation research and policy program, and work to educate and inform New Yorkers and visitors about the amazing ocean ecosystems that surround New York and the charismatic marine species that are found in local waters.

Led by Chin, the building and the exhibit are a collaboration between the WCS’s Design Department, the Portico Group and their consultant team, including Doyle Partners and Ned Kahn, the artist of the Shimmer Wall. The architect is a New York-based firm, Edelman, Sultan Knox Wood. The construction management firm is Turner Construction Company.