On Saturday, May 23, the Brooklyn-based Commodore Barry Club visited the USS Barry, a naval destroyer at its homeport, the Sullivan Piers, Stapleton, Staten Island. The Barry is the fourth ship named in honor of Commodore John Barry, father of the U.S Navy.  The ship was in town to participate in Fleet Week. The Barry conducts air defense, anti-submarine, anti-surface and strike operations.

The club and the ship are both named after Commodore Barry, who rose from his beginnings as the son of a poor Irish farmer to become the highest ranking officer in the U.S. Navy. Club President Mary Nolan was one of the dignitaries at the ship’s commissioning in 1992.

On board, Commander Patrick M. Foster extended a warm greeting and presented Nolan with a medal, a Barry cap and a plaque.  Admiral Robert Lunney (ret.) presented the commander with a copy of Tim McGrath’s “John Barry: An American Hero in the Age of Sail.” Liam Murphy of the Ancient Order of Hibernians participated, Councilmember Vincent Gentile joined in the festivities and Chief Petty Officer Thomas Mccorkle showed President Nolan around the inner workings of the ship.

Nolan also met Executive Officer Commander Jennifer Eaton, who will assume command of the Barry later this year. For more information about the Commander Barry Club, call (718)833-3405 or visit www.commodorebarryclubbrooklyn.org. 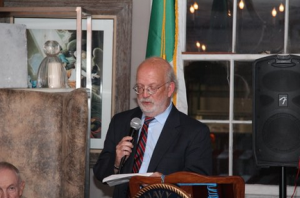