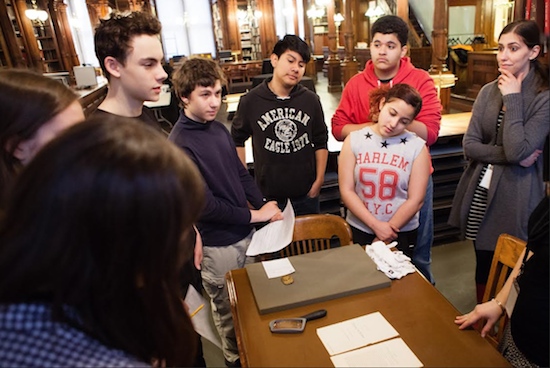 The exhibit was curated by a team of teen curators who participated in BHS’ free after-school museum studies program, which is known as Exhibition Laboratory or Ex Lab. Photo by Lita Riddock
Share this:

On June 9, the Brooklyn Historical Society (BHS) at 128 Pierrepont St. in Brooklyn Heights plans to open an exhibition that explores one of Brooklyn’s oldest and most extensive infrastructure projects: its sewer system.

Called “Brooklyn Sewers: What’s Up Down There?” this exhibit tells the story of the creation of the Brooklyn sewer system through a historical look at four corners of Kings County: Flatlands, Bushwick, Coney Island and Fort Greene.

Visitors are invited to look beneath the surface into the problems, challenges and issues that each of these neighborhoods faced in the creation of the sewer system, and the factors that made an integrated municipal system for sewerage an absolute necessity. The exhibit was curated by a team of teen curators who participated in BHS’ free after-school museum studies program, which is known as Exhibition Laboratory or Ex Lab. It will remain on view until May 29, 2016.

As with any municipal construction project of scale, the construction of Brooklyn’s sewers wreaked havoc on residents in many ways. The exhibition explores innovative solutions engineers pursued to limit the impact of underground digging on densely developed streets and the courtroom drama between two public works projects — the sewers and the railroads.

The topic is explored in four sections, with each section having an “above-ground” and “below-ground” story told through photographs, drawings, maps and contextual information. Objects featured include a chamber pot and a Harper’s Weekly cover from 1885 featuring the Knickerbocker Avenue Extension from BHS’ collection.

“The topic of sewers is relevant for today’s Brooklynites whose health and sanitation depend on an infrastructure designed with 19th century technology for a 19th century population,” said Deborah Schwartz, president of BHS. “And while its themes will resonate with visitors, the real beauty of this project is that it was created by young people — possibly future museum curators and administrators.”

Exhibition Laboratory is made possible through the support of Astoria Bank, The Bay and Paul Foundations, Con Edison, The Ferriday Fund Charitable Trust, Hearst Foundations, Eliot Nolen and Tim Bradley, The Pine Tree Foundation of New York and The Pinkerton Foundation.