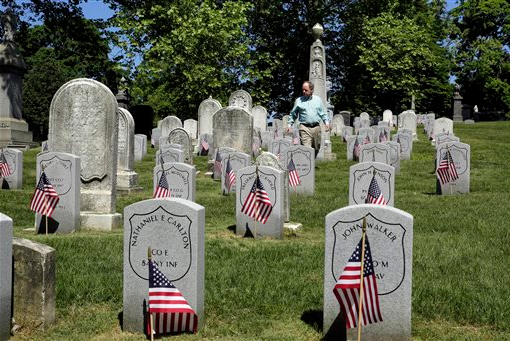 Resident historian of Green-Wood Cemetery Jeff Richman walks among Civil War gravestones in the cemetery on Friday. The cemetery, last resting place for thousands of Civil War veterans, is opening an exhibit, titled "To Bid You All Good Bye: Civil War Stories," commemorating the 150th anniversary of the end of the nation's bloodiest conflict. AP Photo/Richard Drew
Share this:

Brooklyn’s historic Green-Wood Cemetery, last resting place for thousands of Civil War veterans, is opening an exhibit commemorating the 150th anniversary of the end of the nation’s bloodiest conflict.

The exhibit, titled “To Bid You All Good Bye: Civil War Stories,” opens Saturday and runs through July 12 in Green-Wood’s Historic Chapel.

The exhibit uses photographs, letters, artifacts and other items to tell the stories of 19 men and one woman who played a role in the Civil War and are interred among the cemetery’s more than 550,000 burials. Several of them died during the war, including Horatio Howell, a Pennsylvania chaplain who was shot on the steps of a hospital in Gettysburg.

The 478-acre cemetery opened in 1838 in what was then a rural section of Brooklyn. Some of the first New Yorkers to die during the Civil War were brought back home for burial at Green-Wood, including Clarence MacKenzie, a 12-year-old drummer boy who was accidentally shot by a fellow Union soldier soon after the war started in April 1861.

The lone woman in the exhibit is Quaker abolitionist Abigail Hopper Gibbons, a nurse and conductor on the Underground Railroad that led escaped slaves to freedom in the North.

Green-Wood historian Jeff Richman said the exhibit focuses on a few of “the more poignant, dramatic, heart-rending stories” among the thousands of Civil War-related burials. Richman and a team of volunteers have spent the past 13 years identifying the graves of 5,000 Civil War veterans buried at Green-Wood.

“What we wanted to do is bring it down to a personal level,” he said.

The title of the exhibit comes from a letter written by Capt. Henry Sand of the 103rd New York Volunteer Infantry as he lay wounded on the battlefield at Antietam on Sept. 17, 1862: “My wound is painful but not mortal I believe — however I send you these lines to bid you all good bye in case I never see you again.”

Sand’s leg wound did prove to be fatal. According to Richman, Sand lingered for weeks in a battlefield hospital before dying in the arms of his mother, who had journeyed south from New York to tend to her wounded son. He’s buried in a plot near the chapel where the exhibit is being displayed.