May 6, 2015 By Alba Acevedo Special to the Brooklyn Daily Eagle 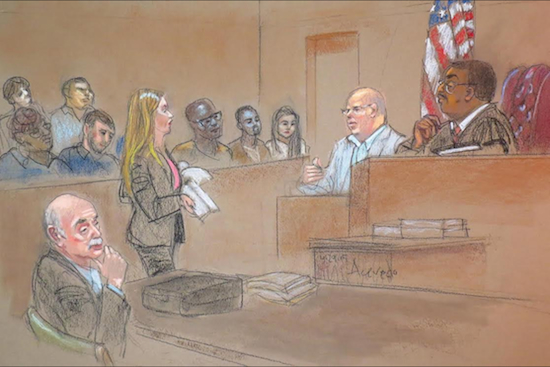 At issue in this summary jury trial is the question of damages. The plaintiff, represented by Jack Walisever (seated, far left), trial counsel to the law offices of Thomas J. Stock, alleges his thumb was seriously injured and that he has suffered neck and back pain since his vehicle was rear-ended in March 2011. The defendant had attempted to drive around a bottleneck in a Queens strip mall parking lot, while an armored car blocked traffic.

The plaintiff had made produce deliveries to the area supermarket and was writing invoices at the wheel as he awaited the gridlock to clear. He claimed his thumb was wrenched completely backward when he lurched forward from the impact, and he has since been relegated to lighter duties. The plaintiff is seeking damages for pain and suffering. The defense, however, sought to cast doubt on whether the plaintiff could have suffered serious injury from an impact with a slow-moving sedan as he sat in a 16,000-pound box truck.

While the defendant was found 100 percent negligent for the accident, the jury determined that the plaintiff could not recover damages pursuant to the no-fault law serious injury threshold in the case that concluded last week in Kings County Civil Term. SKETCHES OF COURT: Case settles for $950K after partial verdict against driver of parked truck on BQE SKETCHES OF COURT: No damages awarded in t-bone car crash