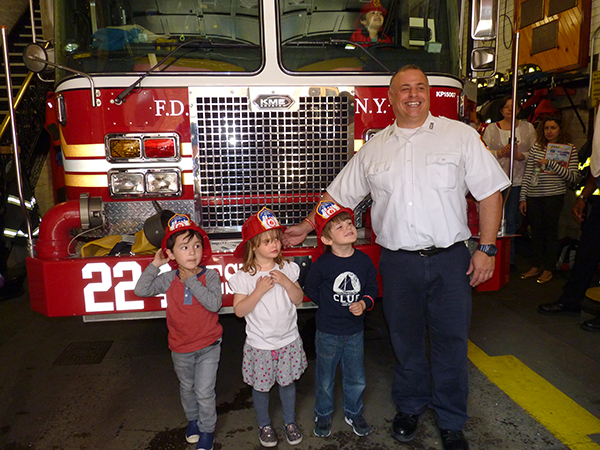 The popularity of the firehouse and its firefighters was evident as dozens of kids wearing red fire helmets clambered up into the engine, collected coloring books and watched with awe as firefighter Al Coombs slid like greased lightning down the fire pole.

“Firefighters usually have great rapport with the neighborhood, and this house has some of the friendliest guys,” Capt. Garda said. Garda has been on the job for 20 years, and at Engine Co. 224 in Brooklyn Heights for one year.

Engine Company 224, founded with a horse-drawn engine in 1886 as Engine Co. 24, moved from Furman Street to 274 Hicks St. in 1904, according to a plaque showing the history of the company.

The firehouse structure, described as a “Gilded Age mansion for NY’s Bravest” by Brownstoner, received Landmark status in 1965.

Brooklyn Heights’ other firehouse, also beloved by its neighbors, is Engine Company 205 / Ladder Company 118 at 74 Middagh Street in the north Heights.

Across the city, FDNY open houses drew thousands of neighbors eager to tour stations, view demonstrations and meet the firefighters and EMTs who might one day save their lives.

The event was part of the year-long celebration to commemorate the 150th anniversary of FDNY.

Last December, Mayor Bill de Blasio and Fire Commissioner Daniel A. Nigro said the city was using the occasion to both celebrate the past and to make sure that in the future, FDNY becomes more representative of the population it serves.“…We’re going to see quite a bit of the FDNY at parades, festivals, sporting events, concerts, and attractions – events that bring energy and tourism to our city,” Nigro said. “We are going to bring New Yorkers into firehouses like never before, in many diverse communities we serve, because we want everyone to know what this department is all about.”

The campaign is themed “The Year of the Bravest.”