Victims are getting calls from crooks claiming to be IRS agents 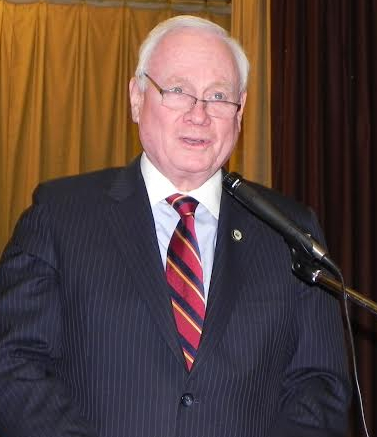 State Sen. Marty Golden says it seems like there are new reports of scams coming in every day. Eagle file photo by Paula Katinas
Share this:

You’re sitting at home watching “Dancing with the Stars” on ABC and you get a phone call from someone claiming to be from the Internal Revenue Service (IRS) who tells you that you owe a fortune in back taxes and that if you don’t pay up immediately, a warrant will be issued for your arrest.

The IRS agent also offers a “helpful” hint. You can pay your back taxes by using a reloadable debit card that can be purchased in most convenience stores. You are instructed to purchase a card, put money on it and then call the agent back and read the card number and the card’s PIN number over the phone.

What do you do? The answer, according to state Sen. Marty Golden and Assemblymember Nicole Malliotakis, is to call the police. That’s no IRS agent on the phone. It’s a scam artist.

Golden (R-C-Bay Ridge-Southwest Brooklyn) and Malliotakis (R-C-Bay Ridge-Staten Island) are urging their constituents to remain vigilant against what they are calling an “evolving threat” of telephone scams.

“We must also make sure our friends and family are aware that these attempts to swindle us exist and any attempts at being defrauded must be reported to the authorities,” Golden said.

The IRS urges taxpayers not give out money or personal financial information to anyone on the phone.

To help educate the public on the various types of scams out there, the IRS has set up a special section on its website, www.irs.gov, to highlight the schemes and how they work. There are a dozen common scams listed on the website.

“Whether it’s a phone scam or scheme to steal a taxpayer’s identity, there are simple steps to take to help stop these con artists. We urge taxpayers to visit IRS.gov for more information and to be wary of these dozen tax scams,” IRS Commissioner John Koskinen said in a statement.

If it’s not the IRS, it’s Con Edison or National Grid, Golden said.

The scam artists also pose as representatives of utility companies who call victims on the phone and claim that the victims haven’t paid their bills and that if they don’t pay up immediately, their electricity or gas will be turned off.

The perpetrator uses the information given by the victim to remove the money from the reloadable debit card. At that point, the victim is out the money and there’s no way to get it back.

Making matters worse for victims, the scam artists can disguise the caller ID to make it appear as if the call is really coming from the IRS or the utility company.

“It’s scary to think about the lengths to which these people will go to make a dollar,” Malliotakis said.

“It seems like almost every day, you hear of people being caught victim of a financial scam involving utilities, computer services, utilities, vacations and more. We must remain alert so to keep ourselves from being a victim,” he said.

“It’s not a small number of cases. There are a lot of people out there in the Bay Ridge, Dyker and Marine Park areas that have been contacted by these people,” Golden told the Brooklyn Eagle on Thursday. “Attempts have been made to steal people’s money.”

The crooks are the lowest of the low, Malliotakis said. “The majority of their victims are the elderly and the homebound, some of the most vulnerable people in society,” she said.

Most of the scams are being perpetrated from outside the U.S., according to Malliotakis. “As most of the calls are coming from outside the country, the most effective way to put an end to this fraud is to make it less lucrative by getting the word out that these calls are not authentic.  Anyone who receives such a call should contact their local police precinct to check the veracity of what’s being asked of them,” she said.

Community Board 10 (Bay Ridge-Dyker Heights) officials are also concerned about the scams. Josephine Beckmann, the board’s district manager, said a former board member was recently contacted by a scam artist who demanded $1,000.

Beckmann also cited another troubling case in which a relative of a board staff member received a phone call from someone claiming that he had abducted the woman’s brother. The caller demanded ransom money. The woman was able to track down her sibling and learned that he was safe and sound.

“Imagine getting a phone call like that? It’s terrifying,” Beckmann told the Eagle.

In many of the cases, the crooks are using throwaway cell phone, Beckman said. “If police try to trace the call, they find it comes from a throwaway phone. The con artist gets away with the crime,” she said.

The scam artists don’t always operate by phone. Golden said that on April 19, a National Grid impersonator was knocking on doors of homes in the area and was persistent in asking to read the meter.  The crook fled. National Grid does not send out meter readers on Sundays, Golden said.