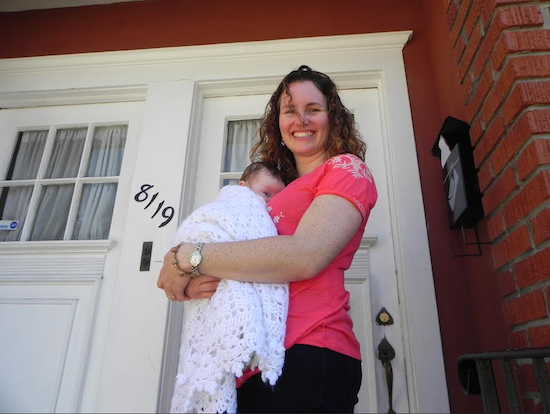 Andrea Stockton, holding her two-month-old daughter, is a stay-at-home mother of three who says the city’s one-size-fits-all universal pre-kindergarten program isn’t the right fit for everyone. Eagle photo by Paula Katinas

Andrea Stockton, a stay-at-home mom from Bay Ridge, said that while she loves the idea of giving children a head start in their education by having them attend pre-k classes, she’s not crazy about making the kids sit in a classroom all day.

The vast majority of the city’s pre-k classes are full day classes, according to Stockton, who said that half-day sessions would be better for some families.

“A week of full day pre-k adds up to 31 hours a week! Thirty-one hours in a classroom for a four-year-old is difficult,” Stockton, a mother of three, told the Brooklyn Eagle.

Stockton recently started a petition drive on www.change.org to try to convince the de Blasio Administration to pump more funding into half-day pre-k classes. To date, the petition has garnered nearly 700 signatures.

“While I recognize that most parents prefer full day pre-k for their children, there are still a lot of us who would rather have our kids in a half-day program. It allows the child to have a more gradual transition to the school environment. They can adjust to the rhythms of school without being away from home too long. After all, we are talking about four-year-olds here,” Stockton said.

Half-day pre-k worked out well for Stockton’s oldest child, a five-year-old boy who is now in kindergarten.

“My kindergartener went through half-day pre-k last year and it was wonderful,” she said.

But Stockton is worried that when her second son, who is three years old, is ready for pre-k next year, he won’t be able to enroll in a half-day program.

“Very few are being offered; almost none. In Bay Ridge’s there’s only one; Tiny Tots,” she said, referring to Tiny Tots Playhouse, a pre-school at 243 88th Street. The half-day slots tend to fill up quickly, she said.

The city’s universal pre-k program is free and is offered in public schools and in certain private schools that contract with the city to offer the classes.

In addition to her two sons, Stockton also has a two-month-old daughter. The infant was sleeping in her arms as she spoke to the Eagle.

“I just feel that parents should have a choice as to whether to send their kids to full day or half-day. We’re not really being given a choice,” Stockton said.

“The administration is always talking about parental choice. But where’s the choice here?” she asked. “A lot of parents don’t want their child in school all day when they’re that young.”

The District 20 CEC, which represents parents from schools in Bay Ridge and Dyker Heights and parts of Bensonhurst, Borough Park and Sunset Park, has not taken a formal position on the half-day pre-k situation, Windsor said.

Wiley Norvell, a spokesman for Mayor Bill de Blasio, said that the majority of the pre-k classes that the city is funding are full day classes because it is educationally sound and because that’s what parents are demanding.

“Free, high-quality, full-day pre-k for every child is clearly the priority for this administration, and with more than 40,000 families having applied in just the past two weeks, that’s clearly the option most families are demanding,” he wrote in an email to the Eagle on Thursday.

The city isn’t closing the door on half-day pre-k, according to Norvell, who said the administration is sensitive to the concerns of parents like Stockton. “As we have already stated, we anticipate continuing a modest half-day program, but we urge all parents to first consider a strong full-day program as they look for the best option to meet their child’s needs,” he wrote.

“We’re asking parents who are skeptical to give full day pre-k a chance,” Norvell told the Eagle.

Universal pre-k, a hallmark of de Blasio’s mayoralty, entered its second phase last month, as parents began signing up their children for classes that will begin in September.

The second phase got off to a strong start, with 21,938 families applying on the first day alone, de Blasio announced.

Stockton’s petition can be found at https://www.change.org/p/mayor-bill-de-blasio-continue-to-fund-half-day-pre-k#petition-letter