March 25, 2015 By Nino Pantano Special to the Brooklyn Daily Eagle The Sarasota Opera has been a sparkling jewel in Florida’s crown since its premiere 56 years ago at the Asolo Venetian mini-theater on the Ringling estate. Performances now take place, and have been for several decades, in the recently renovated charming William E. Schmidt Opera Theatre with 1,100 seats.

Under the stewardship of Maestro and Music Director Victor DeRenzi, the audiences have been large and enthusiastic, and the repertoire beguiling and appealing. In 2016, DeRenzi will complete his 30-year quest to perform all of Giuseppe Verdi’s works

DeRenzi, a native New Yorker can count many Brooklynites and former Brooklynites, among his staff. Before the performance, we exchanged Brooklyn memories with Executive Director Richard Russell; Sam Lowry, director of audience development, who resided in Park Slope for six years; and Greg Trupiano, director of artistic administration who lives in Cobble Hill. Trupiano is also artistic director of the Walt Whitman Project in Brooklyn.

Publicist Laura Grant, who once lived on Prospect Avenue, fondly recalled the people, places and things she still misses about Brooklyn. All of that Brooklyn “grit” is a valuable tool for this great energetic opera company. It was also nice to greet Stephanie Sundine, who directs many of the operas at Sarasota and is the wife of DeRenzi.

On the evening of Saturday, March 14, we attended the production of “Tosca.” The action takes place in Rome in 1800 and is based on a play by French playwright Victor Sardou. The great composer Giacomo Puccini set it to music with a libretto by Luigi Illica and Giuseppe Giacosa. This “shabby little shocker,” as it was called, premiered in Rome in 1900 and has thrilled audiences ever since.

In the opera, famed singer Floria Tosca and her lover Mario Cavaradossi, a painter and revolutionary, are victims of Rome’s Chief of Police Baron Scarpia, who accuses Tosca of harboring a “political refugee.” Tosca makes a “bargain” for a “mock” execution of Cavaradossi with the sadistic, lustful Scarpia, then stabs him. When Cavaradossi is really killed by a firing squad and Scarpia’s men pursue her, Tosca leaps to her death from the top of Castel Sant’Angelo.

During these calamitous events, rhapsodic love duets and great arias follow with spectacle, pomp and drama. As Tosca, Kara Shay Thomson dominated the stage with a performance that echoed the golden days of the past.

In the first act, the “Jealousy” duet was coy and teasing, fiery and loving, with Thomson’s lustrous soprano catching every eye and ear. In the second act, her confrontation with Scarpia had the audience at the edge of their seats. Thomson sang “Vissi d’Arte” with tremendous passion all the way to “Signore” with resounding power, then faded and tapered beautifully with a heart-rending “Rimuneri Cosi” at the finale. That was disrupted by applause and bravos from audience members who had to express their appreciation of that magical moment.

In the third act, the duet “O Dolci Mani” was sung with voluptuous tenderness, and her final leap and cry “O Scarpia, Avanti a Dio” had us holding our breath. The audience went into a frenzy.

The part of Cavaradossi was sung by Rafael Davila, whose lusty and lyrical tenor served us heaping portions of appetizing vocal desserts. His “Recondita Armonia” in the first act was sung with beauty of tone and a climactic finale of “Tosca, Sei Tu.” The jealousy duet made for a perfect blend, and his acceptance of Tosca’s jealousy was well done. Davila’s torture scenes were credible and moving, and his  cries of “Vittoria, Vittoria” resounded through the theater. His defiance of Scarpia was visceral, and one felt the contempt blazing in his characterization.

In the last act, the famed aria “E Lucevan le Stelle,” with the ceiling sparkling with stars, was indelible. Davila saved the sobbing for afterward, which was a strong touch. He gradually went from strength to strength with fine shading, power and passion to spare. His voice soared with Thomson’s in the “O Dolci Mani” duet.

Scarpia was villainously portrayed by Mark Walters, whose dark baritone gave one goose bumps both at his sudden entrance and the “Te Deum” in the first act. His was a brutishly elegant Scarpia. Walters’s exquisite singing of “Gia…Mi Dicon Venal” was like Iago’s creed in Verdi’s “Otello.” His cries of “Piu Forte” for Cavaradossi’s torture rack came from his devilish soul, and his mock bargain with the hapless Tosca made one feel quiet joy at her knife thrust and her telling him to choke on his own blood. Tosca’s “Muori, Muori,” as shouted by Thomson to the dying Scarpia, was never more deeply appreciated. His was a suave, serpentine Scarpia with the lust of a lout. Walters’s robust baritone had a penetrating beauty at its core and made a strong impact. Young Bok Kim as Angelotti, a political prisoner aided by Cavaradossi, used his strong bass with the proper desperation.

Ricardo Lugo was a cantankerous and lovable Sacristan, his basso buffo a joy to behold; George Ross Summerville was an excellent spidery Spoletta, his versatile tenor holding us like Velcro. Eric Lindsey, also a studio artist, had a fine authoritative baritone as the policeman. Basso Tyler Putnam was a resonant voiced somewhat sympathetic jailer.

Serenna Jones, a youth opera artist, as the offstage shepherd, had an angelic voice that could be heard clearly. The sublime music was like nature’s tone poem at the beginning of the third act.

DeRenzi and the inspired orchestra gave their all and attained what Puccini and his collaborators strived for with a masterful performance of sweeping romantic melody, violent outbursts, rhapsodic arias and duets and a riveting finale!

Stage Director Martha Collins had every one in proper place with much visual impact. I would rather Scarpia face the bishop in the “Te Deum” procession and genuflect and kiss his ring at the finale rather than face the audience and cross himself. Either way, the audience got the point of his desire and hypocrisy.

Howard Tsvi Kaplan’s costumes were brilliant and colorful, from Tosca’s gown to her sparking tiara. Scenic designer David P. Gordon and lighting designer Ken Yunker showed their genius with the sets for the church of Sant’Andrea Della Valle in the first act, Scarpia’s lush room at the Palazzo Farnese in the second act and the parapet of the Castel Sant’Angelo in the final act. To see the subtle light changes from dusk to dawn with the dome of St. Peter’s in the distance was sheer magic. Dawn Rivard was the subtle, superb hair and makeup artist.

Stage Director Martha Collins, with crystal clarity, set the action in the stark way it was meant to be. She combined brutality, hope and love in a galvanizing performance that had the SRO audience cheering. Tosca’s leap had the audience gasping.

The excellent subtitles were translated by DeRenzi. He and the Sarasota Opera are “priceless” advocates for the great art of traditional grand opera.

The lovely warm weather was a respite from the snow and ice we left back in Brooklyn, and the palm trees and restaurants on nearby Pineapple Street were part of the oasis of the Sarasota Opera. We were like the swallows returning to Capistrano. Many come in for the weekend and the opera, and Sarasota truly gives us unforgettable opera in a cultural oasis. Bravo to all! 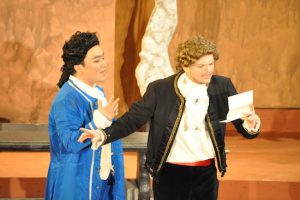