Court rules city within right to revoke a use of Atlantic Ave. subway tunnel 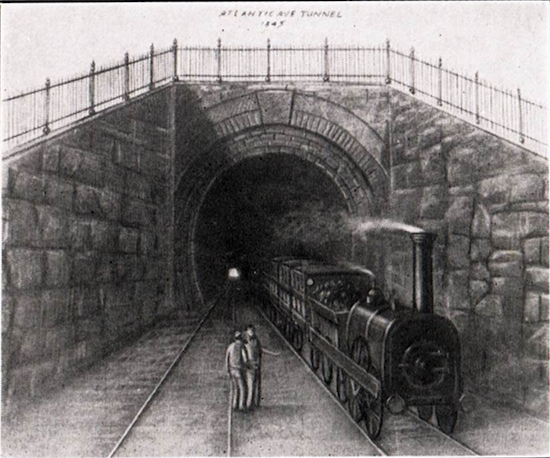 A historical drawing of the circa-1844 Long Island Rail Road tunnel beneath Atlantic Avenue. Courtesy of Brooklyn Historic Railway Association
Share this:

The Brooklyn Historic Railway Association (BHRA) is still prohibited from using the long-abandoned, circa-1844 Long Island Rail Road (LIRR) tunnel under Atlantic Avenue as part of a historic preservation effort, an appellate court has ruled.

The justices of the Appellate Division, 2nd Department, ruled against BHRA in a contract dispute with the City of New York, finding that the city had clear authority to revoke BHRA’s license and thus did not breach any agreement between the two parties.

Last week, a panel of four Brooklyn appellate justices unanimously voted against BHRA’s claims that the city breached its contract and committed acts of fraud when it canceled two agreements  that allowed the association to use and maintain a half-mile subway passage under Atlantic Avenue.

Tunnel tours led by Robert Diamond, BHRA founder and chairperson, were a popular attraction until the Fire Department and the city Department of Transportation (DOT) in 2010 revoked the city’s previous agreements that allowed Diamond to use the tunnel.

A lower Brooklyn court, in 2012, dismissed the majority of BHRA’s breach of contract suit, with presiding Judge Sylvia Ash striking down nine of the association’s 15 claims against the city.  BHRA later appealed to the higher Brooklyn court, which also held that the contract between the two parties was unambiguous as to the right of the city to revoke the agreement at any time.

In 1986, the city and BHRA entered into a “consent and revoke” agreement whereby the city permitted BHRA to use the abandoned railway passage under a stretch of Atlantic Avenue that separates Brooklyn Heights from Cobble Hill. The terms of the agreement stated that the city had the right to revoke the agreement at any time. The agreement further limited BHRA’s use to a 10-year expiration date.

The 2011 “Guinness Book of World Records” identifies the passage as the world’s oldest subway tunnel (although Guinness calls it a subway tunnel, it was actually a railway tunnel). Reaching from Columbia Street almost to Boerum Place, it was built by the LIRR — travelers would take a ferry from Manhattan, then take the train to Long Island. The tunnel was sealed off in 1861 after real estate interests banned steam trains from Brooklyn and was largely forgotten until Diamond, then a young engineering student, discovered the passageway in 1980.

BHRA’s agreement to use the tunnel was renewed in 1998 and again in 2008. The city moved to revoke the use agreement in 2010.  The parties also entered into a separate “consent and revoke” agreement in 2000 allowing the BHRA to create a “moving trolley museum” and related trolley line in Red Hook. This agreement was revoked three years later.

In 2011, through attorney Gabriel Salem, BHRA and Diamond sued the city for damages.

The higher court of appeals dismissed the association’s case-in-chief, finding that the city had the “unconditional and unqualified right to revoke and terminate the consent agreement at any time, and, in effect, for any reason, without liability.”

The 1986 agreement and each subsequent renewal included contract language granting the city “revocable consent” and further clarified that BHRA was acquiring “no right, title or interest” in the space as a result of the contract. Under these terms, the court held, the city could not have breached a contract that it was within its right to break.  Revocation of the use agreement as well as the moving trolley museum did not constitute a breach of contract because the city had preserved the right to unceremoniously retract its previous consent to BHRA.

“Since the revocation was authorized by the express terms of the agreement, it did not constitute an actionable breach,” the appellate court ruled.

Diamond and the BHRA argued, in court papers, that the issue of the revocation clause was only recently discovered despite the fact that the same language appeared in each renewal of the consent to use agreement.

According to the BHRA, the agreement with the city was a de facto franchisee arrangement allowing the BHRA to use and occupy city property to provide a public service.

To bolster its argument, BHRA pointed to a 1986 recommendation by the now-defunct Board of Estimate, then the city’s highest governing body, that the city give BHRA and Diamond a 50-year agreement.  “A 50-year agreement can only be tied to a franchisee,” Diamond told the Brooklyn Daily Eagle in 2011.

The Eagle also noted that the agreement, as it was eventually approved, specified that Diamond give the city a percentage of his earnings from use of the tunnel. “Usually, only franchise agreements have percentages,” said Salem. “Revocable consent agreements are almost always a flat fee and usually apply only to private property [not a tunnel] beneath a city street.”

The appellate court did not address the issue of whether the agreement was a franchise by virtue of facts not included in the actual contract or speculation of the city’s prior conduct in similar use agreements, but did state that the city did not fraudulently misrepresent the rights it granted BHRA.

“[T]he documentary evidence utterly refutes [BHRA’s] allegations and conclusively establishes, as a matter of law, that the [city] did not misrepresent the nature of the rights conveyed by the revocable consent agreements,” the appellate justices unanimously held.

The association also argued, albeit curiously, that the city engaged in tortuous libel by giving disparaging information to local newspapers, including the Eagle,  declaring the tunnel project unsafe. In December 2010, the FDNY told the Eagle that the Atlantic Avenue tunnel was “not a safe place for the public to be allowed to go” and that “it’s dangerous down there.”

“We…brought it in the first place to highlight that there was no hearing or opportunity to address any such concerns – just a revoking of the consent – and further the FDNY never sent BHRA or Diamond one shred of paper, not one citation, relating to safety concerns,” said Salem.

Those quotes, BHRA argued, “caused damage to the established good will of BHRA.” The following year, the city told Courthouse News Service and the Eagle that it “withdrew its consent owing to serious public safety concerns cited by FDNY, arising from the conditions in and the difficulty of access to the tunnel.”

The appellate court deemed BHRA’s remaining claims “without merit” and dismissed the entire case against the city.

“We are pleased with the court’s decision,” a spokesperson for the city’s Law Department told the Eagle. BHRA’s attorney Salem noted, “We’re filing an amended complaint.”

UPDATE NOTICE
This article has been updated to include additional quotes from BHRA’s attorney, Gabriel Salem.