A Brooklyn federal judge last week sentenced a police officer to 18 years behind bars for committing a series of armed robberies and attempted armed robberies — including some while in uniform — as well as conspiring to distribute cocaine and heroin.

Officer Jose Tejada, assigned to the 28th Precinct in Harlem, was convicted in November 2013 of two counts of obstruction of justice and in June 2014 on the drug-related charges. The evidence presented at the two trials showed that Tejada participated in multiple armed robberies and attempted robberies, which netted thousands of dollars in cash and multiple kilograms of cocaine.

Tejada was a 17-year veteran of the NYPD who, at the time of the criminal conduct, was assigned to the 28th Precinct in Harlem. This prosecution arose out of Tejada’s commission of multiple robberies and attempted robberies in Queens, Manhattan and the Bronx in 2006 and 2007, some of which he committed while on duty, in uniform and using an NYPD undercover vehicle.

In one such attempted robbery on Schley Avenue in the Bronx, Tejada — while on duty and in uniform — used his status as a police officer to demand and gain access to a private residence occupied by a husband and wife and their teenaged daughter. Tejada and two other robbers impersonating police officers mistakenly believed that the residence was a stash house for narcotics. In fact, the residents had no involvement in drug dealing. While Tejada and the other robbers unsuccessfully searched the premises for drugs, Tejada attempted to handcuff the male victim and brandished his NYPD-issued firearm in an effort to intimidate the innocent family.

In a robbery near 125th Street and Broadway in Manhattan, Tejada, fellow NYPD Officer Jorge Arbaje-Diaz, and NYPD auxiliary Officer Yvan Tineo pulled over an SUV, handcuffed the driver and stole five kilograms of cocaine hidden inside the car. In another robbery on Seaman Avenue in Upper Manhattan, Tejada and Tineo robbed a drug supplier of three kilograms of cocaine at gunpoint.

“The defendant violated his sworn oath as a New York City police officer to protect and serve the citizens of New York by conspiring to commit armed robberies and to distribute narcotics stolen during those robberies,” U.S. Attorney Loretta Lynch stated.

The evidence at the two trials also showed that Tejada searched confidential law enforcement databases to determine whether there were outstanding warrants for his own arrest, as well as for the arrest of other members of the robbery crew. Tejada then shared that information with his confederates in an effort to assist them in evading arrest.

According to the government, Tejada’s conviction is one of the most recent of dozens of convictions in a set of interlocking cases brought in the Eastern District of New York against the members of violent drug robbery crews who impersonated police officers and frequently committed robberies with real police officers. Tejada is the third NYPD officer to be convicted in these cases. In addition, two NYPD auxiliary officers have been convicted as well. In total, 52 defendants who participated in this robbery crew have been convicted.

-Information provided by the U.S. Attorney for the Eastern District 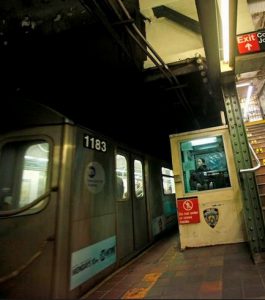 Building a case of self-defense in Brooklyn subway shooting