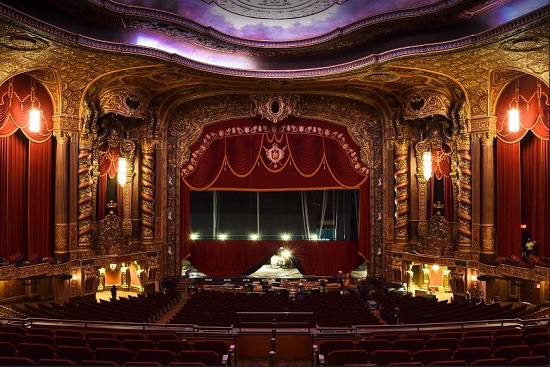 Flatbush Avenue’s Kings Theatre has been out of commission for nearly 40 years, but it officially reopened its doors on Friday as local politicians and civic leaders gave a group of reporters and photographers a tour of the $95 million restoration.

“The wonder has been restored to Flatbush’s historic ‘Wonder Theatre,’” Brooklyn Borough President Eric Adams said at the ribbon cutting ceremony. “The newly restored Kings Theatre is a remarkable open door to our glorious architectural and artistic past as well as a gateway to the economic and cultural revival of central Brooklyn.”

The theatre was originally constructed in 1929 as one of five Loew’s “Wonder Theatres” built in New York and New Jersey. After years of neglect, it was shut down in 1977 and was acquired by the city in 1983.

In 2008 the NYC Economic Development Corporation began looking for a company to renovate it, and by 2012 it hired the Kings Theatre Redevelopment Company — a consortium of ACE Theatrical Group, the Goldman Sachs Urban Investment Group and the National Development Council — for the rebuild. The company broke ground on the renovations exactly two years prior to its reopening.

Former Brooklyn Borough President Marty Markowitz was on hand for the reopening. He called it a “dream come true,” and compared it favorably to Manhattan’s Beacon and Apollo theatres. He said that after sitting for 38 years, he worried about not getting approval from the city to reopen the theatre.

“It took a lot of pressure, but, to the success of the city, the Economic Development Corporation under Seth Pinsky made it happen,” Markowitz said. “[H]e came down here, viewed it, saw a vision and made it happen.” The Kings Theatre seats 3,200, which makes it the largest theatre in Brooklyn and third largest in the city behind Radio City Music Hall and the Paramount. The high curved ceilings, ornate plaster walls, gold-leaf ornament, crystal chandeliers, carpeted floors, plush furniture and salon-type lounge areas — inspired by Versailles and the Paris Opera House — were among the original signature elements that were restored. Local politicians including Assemblymember Rodneyse Bichotte and Councilmember Mathieu Eugene were on hand and touted the jobs the theatre will create. It is expected that there will be more than 100 full-time positions and, with the help of NYCEDC’s HireNYC program, at least 80 of those positions are expected to be filled by members of the Flatbush community.

“With over 200 live performances every year, Kings Theatre is poised to be a premiere source of entertainment in Brooklyn and is already providing much needed employment to the local workforce,” Eugene said. Diana Ross of the Supremes will be the theatre’s official opening night performer on Feb. 3. However, there will be a free ticketed performance on Jan. 27 by local performance groups, including the Brooklyn Ballet and the Brooklyn Youth Chorus for community members as well as an open house tour on Feb. 7. Acts are already booked through next Christmas.