Congratulazioni! to the Boys From Milan.

They’ve bought another prime property in Red Hook — one that apparently is included in their plan to develop a massive waterfront office complex.

We’re referring to the gentlemen from Est4te Four, the development firm that hit the big time by transforming Milan’s Zona Tortona from a rundown warehouse area into a hot spot for fashion designers’ offices, showrooms and studios.

We wind up writing about Est4te Four (yes, that is how the name is spelled) every time we check up on what’s up in Red Hook — because the firm has been buying, buying, buying in the beloved neighborhood.

The deal the developer recently finalized was for 62 Ferris St., which it purchased for $16 million, according to city Finance Department records. The big fenced-in lot has frontage on Sullivan and Wolcott streets and is currently used to park Haddad film-production trucks.

The site consists of two parcels that belonged to two separate owners. An entity whose president is Louis Iovine, which owned the portion of the property that the deed refers as 44-62 Ferris St., was paid $6 million, Finance Department records indicate. An entity whose president is Chaim Babad, which owned the portion of the property ID’d in the deed as 219 Sullivan St., was paid $10 million, Finance Department records show.

The deal closed on Dec. 11 and was recorded on Dec. 31. (We hereby tip our hat to the folks at the Finance Department who were working on New Year’s Eve.)

Est4te Four, which has offices in London and West Hollywood, was represented in the transaction by Patty LaRocco of Douglas Elliman. She’s spearheading condo sales for Est4te Four’s residential conversion of nearby 160 Imlay St. See related story.

As we previously reported, an LLC whose president is Est4te Four executive Stefano Marciano had made a $1.6 million down payment for the site. We now realize the buyer put down 10% of the purchase price.

The asking price for 62 Ferris had been $22 million, according to a listing we found last summer on Realty Collective’s website.

As for that planned waterfront office complex to which we alluded earlier, it’s called Red Hook Innovation Studios. Check out these renderings of it by architecture firm NBBJ. It took a while for the firm to get Est4te Four’s permission to send them to us for publication — but it was worth the wait.

According to NBBJ’s website, four new office buildings are contemplated, along with a waterfront promenade and park areas, in an urban campus. (We do hear the expression “urban campus” a lot in B’KLYN these days, don’t we?) The office buildings would surround a historic warehouse at 202 Coffey St. that’s slated for a makeover into a fashion, art and music event space. The redevelopment of 202 Coffey was designed by another architecture firm, Adjmi & Andreoli, which is now known as AA Studio.

See the site plan that NBBJ drew up? If you match it up with an aerial photo of the area, you see that the blocks where the new buildings are planned include property next to 202 Coffey that also belongs to Est4te Four, which uses the address 68 Ferris St. Plus there are new buildings sketched in at just-purchased 62 Ferris. That takes the mystery out of what Est4te Four intends to do with its latest acquisition, which is right across the street from 68 Ferris.

A tip of the hat to the ever-vigilant website New York YIMBY, which was was the first to publish renderings of Red Hook Innovation Studios. 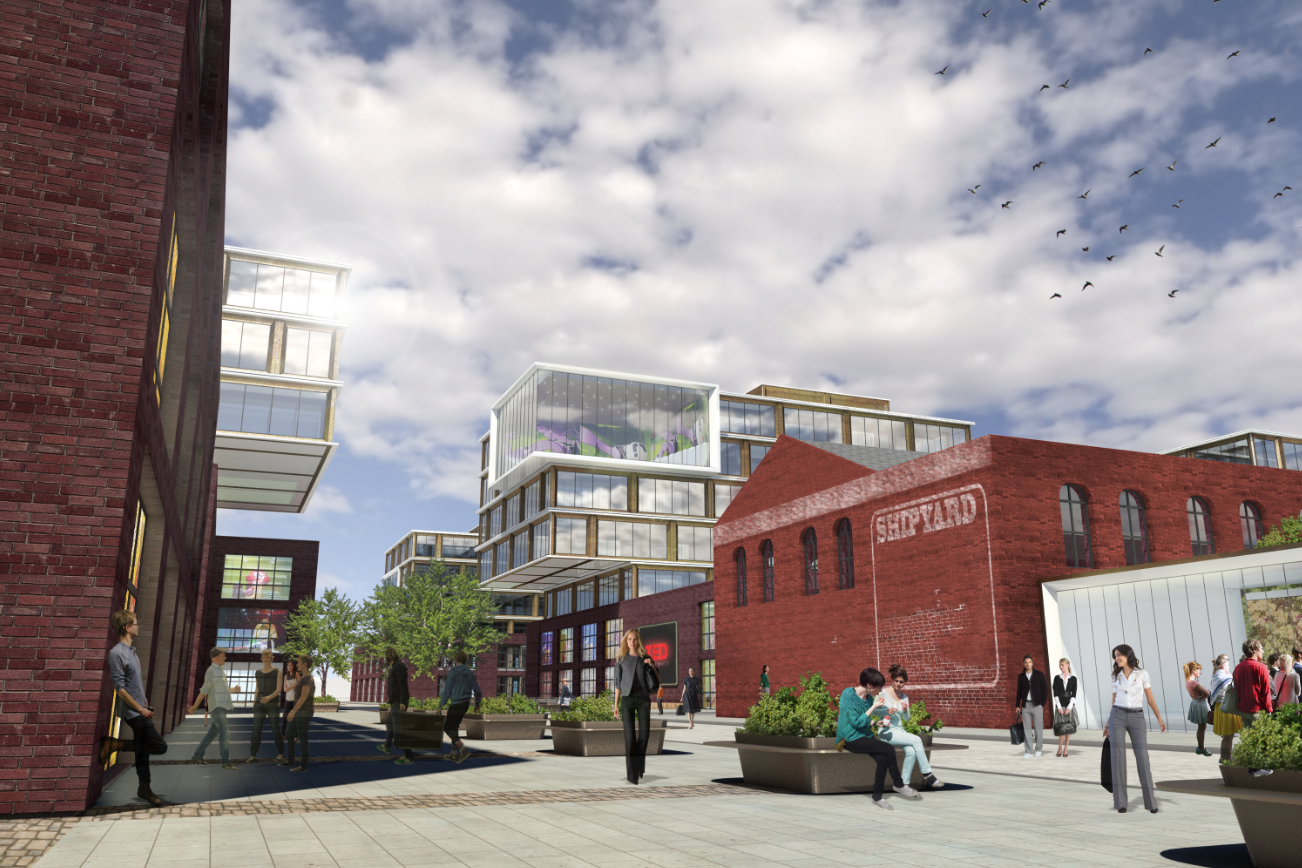