St. Joseph’s College was finally able to play its first game at its brand new arena, the Hill Center, as the women’s basketball team dropped its inaugural game there 84-72 to Old Westbury on Saturday. Eagle photos by Rob Abruzzese
Share this:

After many years of planning, delays and construction, St. Joseph’s College officially opened the Hill Center, a brand new gym and basketball arena, on Vanderbilt Avenue in Fort Greene where the women’s basketball team lost 84-72 to Old Westbury Saturday night.

“It’s fabulous, it’s wonderful and terrific,” said Sister Elizabeth Hill, St. Joseph’s former president and the namesake for the building. “We’ve been waiting for this for a very long time. Planning for the building took three or four years and then the actual construction, because we kept running into problems.”

The building is a brand-new, three-story facility located on Vanderbilt Avenue between Dekalb and Willoughby avenues. Its primary purpose is for basketball and volleyball, but it also features a fitness center, gym, dance room, offices and extra space for classrooms. It additionally features a balcony with views of the Chrysler Building and parts of Manhattan.

More than 150 student-athletes from 13 different sports will put the building to good use. All students, faculty and staff will be allowed to use the fitness center as well. Athletic Director Frank Carbone expects that the athletic programs will continue to flourish with the new building.

“You have to see our old gym,” Carbone said. “When I first started recruiting, holy cow, you talk about a dollar and a dream, we were lucky if we had a dollar. Now out-of-state students will start looking at us. Once we start putting photos of this place up people will realize that we have a little gem here in Brooklyn. This is a game changer.”

St. Joseph’s College built on a former parking lot. Designed by architects Bentel & Bentel, the entire project cost an estimated $15 million and that was only for the building itself. Almost all of the equipment inside, from desks to shower curtains, was paid for by alumni donations.

“They believed in what we were trying to build,” Carbone said of the alumni donors. “Once we got the momentum, we got the alumni on board. We were very fortunate to get so many donations.”

The arena might have been named after Sister Hill, but she credited its creation to Carbone. She and the alumni even decided to name the basketball court after him.

“Frank Carbone has done a tremendous job of growing [the athletic program] from basically zero when he joined us to a very incredible and competitive program,” Hill said. “We had no fields, but he started baseball, softball and cross country teams. We had a tennis team with no tennis courts and a basketball team with no basketball court. He made this all happen.”

Hill said the new arena shows a commitment to Brooklyn and added that it is evidence that the school is a major player in the Fort Greene neighborhood.

The Lady Bears took the loss to Old Westbury hard in front of a packed house on the first night in the new arena. It was a competitive game early on, but they fell into a big hole late in the first half when Old Westbury went on a 12-1 run and didn’t managed to close the gap after.

“The turnovers really hurt us,” said senior Samantha Retas. “If we could have cut down on those, we would have been right there in the game. It’s a young team so we have a ways to go, but I think we’ve started out alright. We still need to learn how to help each other out more when we’re in trouble.”

Retas added that the new arena should help as more fans are likely to show up to home games and the extra support should lead to more enthusiasm on the player’s part.

“This is amazing,” Retas said. “Playing across the street, we had nothing. We were literally in a dungeon. This will make a big difference. Playing here will help give us more momentum to push harder and win more games.

“I just wish I could go back and have four more years here.” 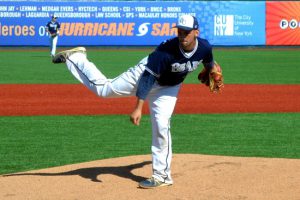 St. Joseph’s baseball team got a taste of the playoffs and wants more