Public Library, whose Central branch is pictured here, is teaming up with the New York Public Library to take on Washington state’s King County Public Library for the fourth annual Book Sorting Competition. Eagle photo by Phoebe Neidl
Share this:

“King County Library beating us this year? Fuhgeddaboutit,” said Salvatore Magaddino, Deputy Director of BookOps, before the competition began. “We are ready, and the Empire State will tower over Mt. Rainer!”

The systems competed to see who can sort the most books in one hour. New York Public Library and Brooklyn Public Library share a state-of-the-art, automated book sorter (as well as all book delivery operations), so they formed a single team. The defeated returning champion King County in Washington State has its own sorter, and had been leading the annual contest with two wins to New York’s one.

Before the competition began, it was announced that this year’s winner gets the “Lyngsoe Sorting Cup” (named after the vendor that built NYPL’s sorter), bragging rights, and the spoils of an annual bet: New York being the winner, it receives Seattle’s Best Coffee and salmon (if King County had won, it would have received Junior’s cheesecake and Ferrara’s pastries).

“While the competitive juices are flowing, it’s important to note that this fun event is a way to showcase the power of the sorter, which has so improved efficiency for both NYPL and BPL, and has greatly improved service for the people of New York City,” Magaddino added. “No matter what happens in the contest, our patrons are still winners.”

The competition began locally at 10 a.m. Wedensday at the Library Services Center, home of the New York sorter, at 31-11 Thomson Avenue in Long Island City and concluded just after 2:30 in the afternoon.

The New York sorter is a high-tech machine that scans barcodes on materials returned from New York and Brooklyn Public Library branches so those materials can be processed, arranged, and delivered back to patrons within 24 hours. It is 238 feet long, runs at 3.5 miles per hour, 4.9 feet per second, or 294 feet per minute. At normal speed, 8,000-8500 items are sorted per hour (or 133-142 per minute). The New York Public Library started using the sorter in 2010. Brooklyn Public Library began using it in 2013 after the formation of BookOps, a fully consolidated, shared library technical services organization that serves both systems.

The current sorting record is 12,818 items per hour (or 214 items per minute), and the error rate is less than one percent. 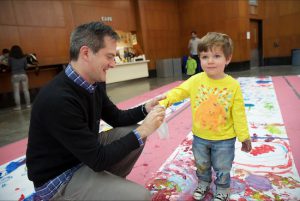