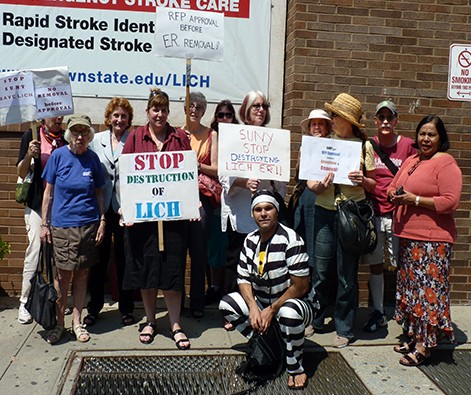 A previous LICH rally. Photo by Mary Frost
Share this:

A march and rally to protest the sale of Long Island College Hospital (LICH) in Cobble Hill, Brooklyn to developer Fortis Property Group is planned for Sunday, Oct. 26 at 1 p.m.

“The goal is to put pressure on Governor Cuomo, the NY State Comptroller, and the NY State Attorney General to reverse this decision and to save our hospital,” the advocacy group Patients for LICH said in a statement. Representatives of community groups including the Cobble Hill Association plan to march.

Update: On Saturday, the Brooklyn Eagle learned that speakers also include Simon’s Republican opponent for 52 AD John Jasilli. In a new development, Brownstone Republicans said they plan to show up in force at the march for LICH. The group also called for Gov. Andrew Cuomo’s opponent Rob Astorino to march.

“Rob Astorino should attend, as everyone here KNOWs the assault on our local hospital by NYS Governor Andrew Cuomo is his Achilles Heel,” the club said.

Astorino appears to be unavailable, according to a statement on the club’s website. “We’ve tried to reach his campaign 100 ways to Sunday. Now, we’ll take to the streets on Sunday ourselves. Again,” the club said.

Members of the community, Brooklyn officials and hospital staff have beeen fighting for almost two years to save the hospital.

As part of the sale, Fortis agreed to have a medical facility on the premises for neighborhood use, to be run by NYU-Langone.

“Without a hospital on the same premises, the facility is an ‘urgicare’ center that might actually be detrimental in a life threatening situation where seconds would count in saving a life,” Patients for LICH said in a statement.