At Least 54 Brooklyn Subway Arrests So Far This Year 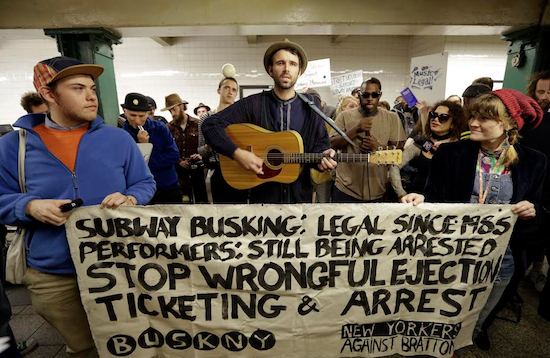 Andrew Kalleen joins other performers during a protest in the Metropolitan Avenue Subway station Tuesday in Brooklyn. Kalleen, 30, was performing on Oct. 17 at the G-train stop in Williamsburg when an officer told him he must leave the station because he needs a permit to play there. The New York Police Department says it's looking into the arrest.
Share this:

Performers have flocked to New York City for years, pursuing plans to make it on Broadway or whatever stage the city has to offer.  However, many are taking to a different type of stage — a below-ground stage that has resulted in hundreds of performers’ arrests.

Brooklyn performer Andrew Kalleen, 30, was arrested in Williamsburg on Oct. 17 with a loitering charge for playing at the Lorimer Street/Metropolitan Avenue subway station.

While the Metropolitan Transportation Authority (MTA) does not issue permits and allows artistic performances on the platform (Section 1050.6c), the MTA’s regulations differ from state laws, which can classify the platform act as loitering.

On Tuesday night, subway performers from across the city ventured to the scene of Kalleen’s arrest, holding “Music is Legal” signs and rallying against what they called a “wrongful arrest.”

“In the police car, the officer was … trying to find some law that he could charge me for,” Kalleen told the Eagle at the rally. “There’s an old penal law for loitering that fits the qualifications.  It says, ‘Unless Otherwise Authorized.’ My argument is, the section that I cited authorizes my right to be there.”

A bystander video captured Kalleen citing Section 1050.6c to an officer and being escorted out of the station.  The video was viewed on YouTube about a half-million times.

The NYPD told the Eagle, “We are aware of the video, and it is under internal review.”  They had no further comments on the matter.

Kalleen’s hearing is scheduled for Friday.

“Freelance subway performance has been legal since 1985,” said Matthew Christian, volunteer and organizer of BUSK-NY, a New York City-based advocacy group that supports subway performers.  “Performers are still being arrested for doing this.”

“I am here to stand with you today,” Levin said, recalling the fact that he used to perform on the underground stage when he was younger.  Levin declined an audience member’s request to perform a rap. “Nothing is more New York than our street performers,” he added.

Although Kalleen and other performers received support from officials, those performing on subway cars aren’t protected by the law. “There are several parameters of 1050.6c, and one of them states that you cannot play on cars,” Kalleen said. “So people on cars are not protected the way I am protected in this case.”

From Jan. 1 to Oct. 12, 2014, 293 subway performer arrests were recorded compared to the 101 arrests in 2013, according to NYPD spokeswoman Sophia Mason.  In Brooklyn alone, at least 54 arrests have been recorded this year.  The numbers almost tripled for citywide numbers and more than tripled in Brooklyn.

According to Mason, the charges are documented as Reckless Endangerment and/or Disorderly Conduct.

Brooklynite Joshua Mulrain, 19, who dances on the J and M lines’ subway cars, said he has been arrested twice this year for performing.

“If my punishment was years, then I would have stopped a long time ago, but it’s petty,” Mulrain said. “It’s like, I spend the night in jail for basically nothing.”

The increased arrests come after Police Commissioner Bill Bratton’s announcement that he would crack down on subway arrests this year.

“They don’t understand how some people’s situations are — some people need this,” Mulrain said. “Me, on the other hand, I could get a job any time…but I like entertaining people; I like having fun … People smiling at me, I like that.”

Whether on the cars or platform, Kalleen stressed knowing your rights as a performer and being knowledgeable of the laws.