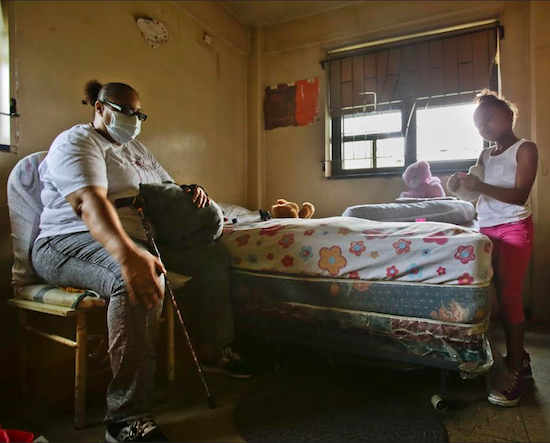 Wanda Coleman clutches her aching knee while watching television with her granddaughter, Jasmine Hodge, in her public housing apartment in New York. Coleman, who wears a mask for severe asthma, is about to be evicted, partly for her son's criminal activity, due to "One Strike and You're Out" policies and will have to go to a homeless shelter.
Share this:

Wanda Coleman sits in the New York City public housing apartment where she’s lived for 25 years, surrounded by empty rooms, bare walls and suitcases lined up by the front door.

Any day now, she and her teen daughter will be evicted and have no other option than to go to a homeless shelter — partly because of her son’s criminal case.

“Why should I be accountable for something that my son did that had nothing to do with my apartment?” asked 48-year-old Coleman, sighing into a surgeon’s mask she wears for severe asthma.

Federal public housing guidelines allow for a whole family to be evicted for one family member’s alleged criminal activity — even if it occurred elsewhere and no one in the household knew about it. The so-called “One Strike and You’re Out” policies aimed at keeping public housing safe have long been criticized by housing advocates as unfair. The federal government three years ago urged changes to related policies because stable housing is seen as one of the best ways to prevent recidivism among ex-offenders.

But so far, housing authorities across the country have begun only limited programs to ease restrictions.

A New York City Housing Authority pilot program started last year will let up to 150 people leaving prison be admitted to public housing to reunite with their families with supportive services. Similar programs have also started in Los Angeles and New Orleans.

But Coleman, tainted by her son’s 2009 drug possession case, will not be able to reapply to public housing for three years.

Under federal guidelines set up in the 1990s, residents can be evicted regardless of whether they have been arrested or convicted of crimes. Evidence used in tenancy hearings simply has to meet the lower threshold of civil case requirements, not criminal ones. And defendants are not guaranteed representation by an attorney.

New York City, the nation’s largest public housing authority, filed 838 such cases last year, according to public records obtained by legal aid lawyers. It could be years before the eviction cases are resolved.

In 2009, Tyrone Coleman was arrested for possession of crack cocaine while he lived with his mother. Her attorneys say he was merely in the wrong place at the wrong time — arrested at the home of a friend where drugs were found in another room — but that initiated an eviction case even before he pleaded guilty to avoid a trial.

NYCHA says Wanda Coleman was evicted party because of her son’s criminal activity — he was arrested a second time before the eviction ruling was reached, though that case was dismissed — and “chronic nonpayment” of rent that could not be ignored.

Coleman and her lawyers said she paid what she owed but she ultimately had no success appealing her hearing officer’s ruling. Her son was arrested a third time while she appealed, but Coleman said he wasn’t living with her by then.

Housing authority officials say the whole-family eviction policy is in place for the safety of all its residents. Different policies, like the new re-entry program, “apply to different resident groups,” spokeswoman Joan Lebow said.

“The overarching points are we have numerous policies aimed at preserving tenancy and at the same time we are committed to broader community safety as a whole,” she said.

Housing advocates say the whole-family guidelines can have dire consequences, breaking up families, keeping them apart and forcing some into homelessness.

“Once a family is out, it is often years before it can obtain stable affordable housing again,” said Mac McCreight, lead attorney of the housing unit of Greater Boston Legal Services.

Families can stay in their homes by removing “non-desirable” members through housing probation stipulations. In New York City, this exclusion is often permanent and bans relatives from stepping foot on the public housing premises again. But that comes with an emotional cost.

“They can’t visit or live with you,” Runa Rajagopal, a supervising attorney at The Bronx Defenders, said of New York City’s policy. “It doesn’t matter if it’s your birthday or Christmas or if someone dies.”

The majority of NYCHA eviction cases were resolved by such probation stipulations before a hearing, according to a South Brooklyn Legal Services analysis of evictions cases between 2006 and 2011. Lebow said the housing authority looks at cases individually and does not always file evictions cases depending on the circumstances.

Coleman could have kept her home if she agreed to ban her son from the premises for life, but her attorneys rejected such a measure.

Her attorney, Brent Meltzer, said Coleman was later denied when she requested one during the appeals process.

Jonathan Miller of Brooklyn knows how difficult exclusion can be. In 2006, the 16-year-old Miller was sentenced to five years in prison for robbing a bodega. He was released in 2011.

His mother, Geraldine Miller, signed a permanent exclusion agreement in 2007 to keep her home of 40 years.

But she faces eviction again because her son was found visiting her public housing apartment in Brooklyn in October.

“I made a mistake, I’m sorry,” Jonathan Miller said. “But you shouldn’t take that out on my mother.”

Because Miller’s fiancé and 5-month-old daughter also live in Miller’s housing project, he cannot visit or stay with them either.

People can apply to have their permanent exclusion lifted. In the first eight months of 2014, NYCHA allowed 48 applicants to re-enter. The Millers applied to have Jonathan re-enter the household but were denied, according to their lawyer, Mimi Rosenberg.

Five years after Coleman’s son was arrested and almost two years after he stopped living with her, she lives, for now, on the first floor in the Farragut Houses in Brooklyn. She and her daughter are facing an eviction order for later this month.

“I don’t know how they could do this,” Coleman said. “How could they just put someone in the street who has a family?” Do Brooklyn residents know how to apply for affordable housing?