Carroll Gardens is way less Italian than in decades past. Everybody knows that.

Still, traces of la bella Italia remain among neighborhood merchants. Where else does the Dunkin’ Donuts have a patio for customer seating with a grape arbor to provide shade and a statue of the Infant Jesus in St. Joseph’s arms?

America Runs on Dunkin’ — but this donut shop’s statue-decorated garden at 383 Court St. feels like the Old Country. To be sure, the Court Street retail corridor running through Carroll Gardens has a big dose of New Brooklyn-style tenants. Also, Sprout San Francisco, a “natural & organic children’s boutique,” is moving to vacant 376 Court St., according to a sign in the storefront window.

But the old guard is represented on Court Street, too. G. Esposito & Sons, a pork store at 357 Court St., has survived since 1922. Marietta, the clothing store at 392 Court St., has been around for three-quarters of a century. 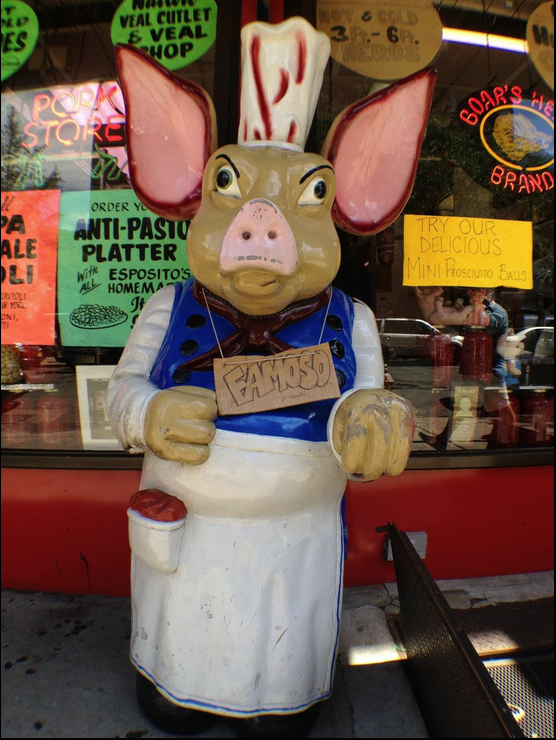 Graffeo was outside Carroll Gardens Florist the other day during the recent heat wave. He was sitting in a beach chair, doing some late-summer tanning.

Carroll Gardens Florist has been at 373 Court St. for 29 years, he said. The building has belonged to him or his family since 1970, city Finance Department records indicate. “I’d move out of Carroll Gardens if I didn’t own the building,” said the Marine veteran, who served in Vietnam. “I wouldn’t have a shop. I would move on. Funerals are not what they used to be.” With many families deciding against wakes or cremating loved ones who pass away, flower sales are down, down, down, he explained. Also, non-traditional flower vendors such as bodegas and Home Depot have taken a big bite out of florists’ business.

With his industry under pressure, why does he stick with it?

“It keeps me out of trouble,” he said jestingly.

His clientele are people who grew up in the neighborhood, he said.

Graffeo and other members of his family live above the store. He doesn’t want anybody else in the building he calls home.

His family has been in the flower business for more than a century.

Before he moved to 373 Court, the shop was across the street for many years.

The origins of the business go back to 1903, when Graffeo’s grandparents, who came from Sicily, opened a small flower shop at President and Van Brunt streets, in what is now the Columbia Street Waterfront District.

As for present-day Court Street, rents for storefronts in the segment that runs through Carroll Gardens are $35 to $50 per square foot, said Timothy King, managing partner at CPEX Real Estate Services. This end of Court Street hasn’t seen the dramatic price appreciation that has occurred closer to Atlantic Avenue, he said.

On the Carroll Gardens end of Smith Street, retail rents are $75 per square foot, King said. It’s a busier commercial corridor than Court Street in this neighborhood.

Smith Street is home to engaging restaurants like Wilma Jean at 345 Smith St. — see related story for more about this eatery — and seafood shack Kittery of Brooklyn at 305 Smith St. Watering holes such as Bar Great Harry at 280 Smith St. and Gowanus Yacht Club at 323 Smith St. abound, and there are shops such as gift-seller Swallow at 361 Court St. There has been a certain amount of turnover on this retail-and-restaurant row. For instance, home-decor store Environment 337 has departed 337 Smith St. — and Kumon Math and Reading Center of Carroll Gardens has taken its place.