Last Thursday, in the wake of the death of Eric Garner on Staten Island and calls for reform to the “broken windows” theory of policing, Mayor Bill de Blasio hosted a community roundtable on police community relations. Reverend Al Sharpton was in attendance, along with Police Commissioner Bill Bratton, as well as other elected officials.

Marco Carrion, Commissioner of the Mayor’s Office of Community Affairs, began by acknowledging that Rev. Sharpton “has long been the first to speak out against instances of injustice affecting people of color in our communities.”

But the Reverend immediately launched his remarks on an accusatory tone. “Let me be very direct. I think, Mr. Mayor, that you ran and captured the hope of this city…and I think that your ability to show some sensitivity is what raised hope and gave you the plurality that you got to become mayor. But now, I think we’ve got to go from that hope to actuality … if Dante wasn’t your son, he’d been [a] candidate for a chokehold.”

Reference to the mayor’s 16-year-old child immediately sparked reverberations in the media. To be sure, Sharpton’s words were meant to sting — to wake up the mayor and his Police Commissioner to the reality of the problem. And in fact, it may have worked.

“The Reverend just talked about taking the idea of hope and actualizing that hope,” Commissioner Bratton said, “and so what I’ve been attempting to do [is] working with the mayor moving forward from the events in the 120th precinct…to identify issues that may have contributed to the events on that day.”

For more conservative, pro-police residents (and those with a long memory), only two words are offered at the mere mention of the Reverend’s name: Tawana Brawley. But to be so cavalierly dismissive of such an important community activist is to ignore his quarter century of progress: the disbanding of the controversial Street Crimes Unit, large verdicts for wrongful deaths at the hands of the NYPD (through lawyers closely aligned with the National Action Network), reform of the NYPD’s practices, diversity in its ranks and a drastic reduction in racial tension.

Continuing today, it’s the Reverend who again puts forward the most bold proposals: Federal intervention in Eric Garner’s case with criminal charges for those who use chokeholds — now and in the future — as opposed to mere “retraining.”

“We’ve asked the Feds to come in because that’s the only time we’ve seen success,” Sharpton said. “With Louima, we had to go to the feds. With Baez, Feds. Rodney King, which I did in LA with others, Feds. The state courts seem incapable of breaking this kind of relationship with the police department.”

Sharpton didn’t completely dismiss retraining of officers, but found it to be only one component of the solution.

“Yes, training is one of the answers, but until police know they will pay and they will pay the same way people in our community and every other community has to pay when they do a crime, it will keep going,” Sharpton said. “The best way to make police stop using illegal chokeholds is to perp-walk one of them that did. And when they understand they got to pay like anybody else that breaks the law, it will send a lesson that ten training lessons will not give them.”

“Reverend Sharpton had strong views and I welcome the display of strong views on the pathway to figuring out how we can work together and make change,” the mayor said. “That is part of what the democratic process is about.”

Asked at an event the following day if he was offended by reference to his son, the mayor dismissed criticism of the Reverend’s comments.

“I don’t feel that…Reverend Sharpton clearly has pointed always in the direction of peaceful protest, and the use of the democratic process to make change,” the mayor said. “And I give him credit for that. He’s always reminded people, no matter how upset they may be, or how troubled, that we have to work peacefully for the change we need, and I honor him for that. Do I agree with everything he says? No. But I think he’s been respectful and we have a productive relationship.”

Among their disagreements are whether officer retraining alone will be sufficient, or should be considered an insult to victims of police brutality. The “broken windows” theory of crime prevention is also under heavy criticism, but is a strategy the mayor supports, claiming that “along with CompStat, [it’s] one of the reasons why, over the last 20 years, we became the safest big city in America.”

“People are concerned that he has too much power in City Hall,” a reporter asked. “What do you tell them?”

“I think Reverend Sharpton’s been active and productive on [these] issues for decades,” the mayor responded. “He’s someone who is certainly a personal friend and someone I respect the advice of.” 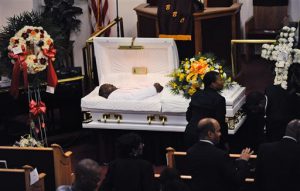