A "dollar van" with heavily tinted windows
Share this:

In response to a story published in the Brooklyn Daily Eagle on July 23 titled “Tinted Window Checkpoints in Crown Heights: Profiling or Smart Policing?,” Brooklyn residents brought an additional tinted-window issue to the reporter’s attention.

Flatbush residents have spoken out about a disturbing and overlooked practice that capitalizes on tinted windows — sources say drivers of “dollar vans,” operating behind tinted windows, have been raping passengers late at night. Although drivers are occasionally arrested and their prosecutions publicized, the trend continues with drivers occasionally getting away with the crime. In some instances, the crime is neglected because victims don’t report it to the police for cultural reasons.  In other cases, the crime is not pursued by authorities for legal reasons.

Minister Janet Lovell, of God’s Miracle House of Power on Flatbush Avenue, is a community leader who knows many of the drivers as well as the victims. Lovell said she wanted to make clear that she and the victims support the dollar van system, which is invaluable to certain transit-starved areas of the borough. They said they also believe that most drivers are well-behaved. But a lack of background checks for drivers, “pitch black” windows and desolate travel times for some passengers due to their works schedules can create the optimal environment for a predator to attempt a sexual assault.

Furthermore, despite an interactive map and multiple video segments by the New Yorker explaining the routes of this “shadow transit” system and an in-depth examination by BKLYNR of the vans’ quasi-legal status, the issue of sexual assault appears to have gone unmentioned.

Below are testimonies of some of the women who were victims or whose family members were victims of an assault or attempted sexual assault:

It doesn’t always start with an assault. One situation I had was when I got into an empty van. The driver immediately started talking about sex. What he can do, and how comfortable it would be with me. I told him I was married.  He said, “Well, how do you know if I’m not better than your husband?” And you know, “You could try me out, you could take my phone number.” He went on and on. I said, “I don’t do that.” He wouldn’t stop. “Well you never know until you try,” he said. And this went on until another passenger or two got on the van. It was a very uncomfortable feeling for me — a feeling of total disrespect.

And then there’s the time during a snowstorm a couple of years ago, [when] I was working a midnight shift at the time. It was two of them — the driver, who was older, and his companion, who was a younger man. And I was the only one [in] the van and it was dark at night and the van was dark. And they were looking at one another and would look back at me. Then the older gentlemen starting making comments like, “Wow, you know, we’re all alone. It’s just us.”

And then my antennas went up. “Oh, it’s a dark night, no one would find anyone out here,” he said. And things like that. And so I picked up my cell phone and I made it look like I was making a call and then speaking to someone, telling them that “I’m in this van, and I’m with these two guys, and it’s just us, and they’re driving me home, and I’m the only passenger.” You know, to make it seem like I was talking to someone, which I really wasn’t, just to let them know that I’m not alone. 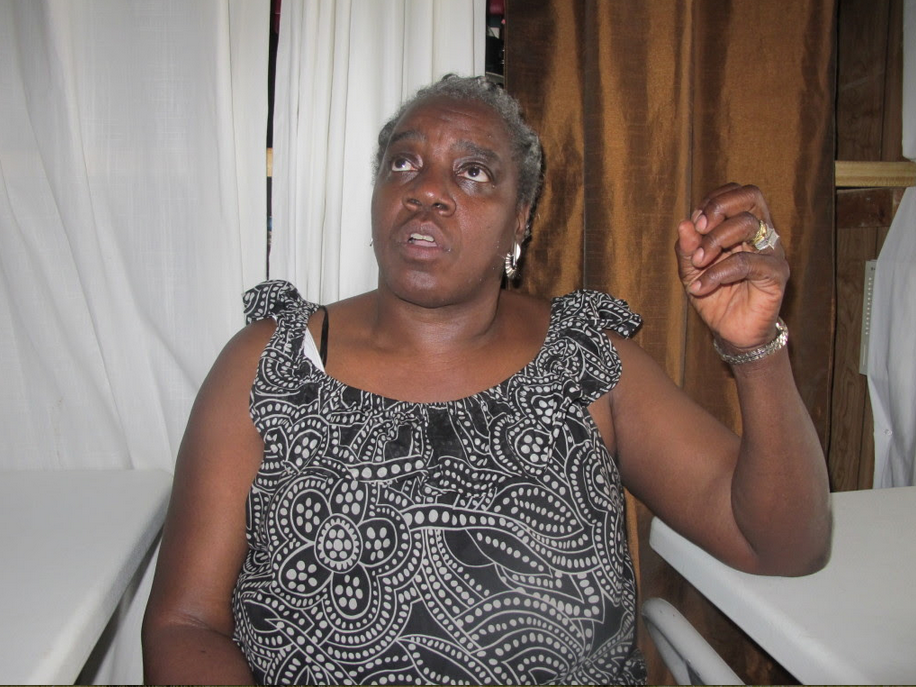 I felt very violated at the time. I felt that, had God not intervened, something terrible could have happened to me. Because, like I said, it was late at night, it was a snowy night, and I was the only one in the van.

And the conversation went awry right from when they picked me up where I got on at Flatbush and Newkirk until I got off at Parkside. And they even off to drop me off at my door, which they don’t do. I said, “No, here right at the corner is fine.” Because at that point all I wanted to do [was] get out of the situation.

After I exited the van, they turned down the block, and watched me — to see what door I was going to. I definitely feel that pretending to be on the phone was the only reason I avoided being raped. The way they had kept looking at one another, and then looking back at me — I felt like I was trapped, like anything could happen to me at that time.

I didn’t go to the police, because I had a similar problem previously, and when I went to the police, all they wanted to know was, “Did the act happen?” And being that the actual act didn’t happen, they couldn’t do anything.

The same thing can still happen today. I’m still leery of getting into certain vans [at] certain times of the night. And especially when I get on the van and I find I’m all by myself. And if there’s a driver with a companion, then I’m worried they’ll team up to overpower me. But the other options are to wait for the bus or take public transportation, and it’s a much longer wait.

I just want to add for women out there to be very, very careful. If you signal for a van, but you have bad a feeling when you open that door — let it close back. It’s okay. Another one will come. Crown Heights resident- The name of the grandmother is withheld due to sensitive content.

My granddaughter was living with her mother in Flatbush, and one night she had visited a friend and she was coming home. I think it was about 10:30 at night. She was 15 years old at the time, and she was raped by the person driving the van. Afterward, she didn’t discuss it. She told me about three years later. But during that period, she suffered many personality problems. She had problems staying at home with her mother — her mother couldn’t adjust to her change in personality. So she came to live with me.

After I finally found out what happened, I suggested counseling to help her become more stable, and focused, but she refused. She denied anything was wrong. I asked her if she reported the incident to the police, [and] she said no, she had not. She didn’t say why. After that, she became involved in multiple abusive relationships. Somehow during the course of all this, she managed to go back to night school and earn her G.E.D., but she internalized the trauma and kept it with her the rest of her life, which became tragic.  She attempted suicide on three occasions, [and] then had an altercation with an abusive boyfriend where she was convicted of assaulting him with a knife, though she claims she was defending herself from an attack — he had raped her at one point as well. As a result of the assault she was sentenced to seven years.  She’s had a real hard life.  I’ve maintained my support through the years, and still tell her she should try to get help. She’s had three children during all this and is very protective of them, even while in prison.

The rape was about 15 years ago now. Things have gotten safer in the city, but the risk is still there. I still hear this sort of thing happening late at night, when women are alone, when women have no one to protect them. And the fact that the windows are so dark and that no one can see into the van presents another problem. Because, had something been going on, maybe someone could have seen inside if the windows weren’t so dark.

I’m supportive of the vans overall. They’re necessary for us, and the drivers need to have a livelihood. But I’m totally against tinted windows. When you’re transported the public to and fro, there’s no justification for them. Also, I’d like to see more screening and background checks for the drivers. Some of them may have a history of sexual assault, in which case the opportunity to take advantage of women may be too great.

Passengers should also be more alert, especially at night, when most of these incidents occur. If you have any inkling or fear of getting on the van, don’t get on. If you have to wait or pay a cab, take that instead so you can be safe. NYPD: Assault on Hasidic Jew in Brooklyn could be a bias crime