UPDATE: A response from the DDC indicates the source of confusion is the result of two overlapping projects–a full reconfiguration of the roadway and the installation of select bus service. Both of these projects have different budgets and time frames, as explained in a quote from the DDC, which appears after the original story (below).

Is the years long, comprehensive reconfiguration of Nostrand Avenue running behind schedule, or right on target? Conflicting reports leave Bed-Stuy residents wondering as a headache continues for nearby businesses.

Previous reporting by DNAInfo and the Brooklyn Reader noted that, after more than two years of work, the $17.5 million project between Atlantic and Flushing Avenues (replacing infrastructure like water mains, hydrants, curbs, sidewalks and traffic lights, while also allowing for the arrival of Select Bus Service) had a scheduled completion of June 2014.  The most recent community board update (from February) similarly claims that all remaining work would be completed this past spring, though this may have been only in reference to the express bus, which has now arrived. But an official DDC statement now lists a completion date of all work for this fall, with the price tag now up to $23 million.

“Business has been way down,” said an employee at Halal Grill, on Nostrand between Gates and Monroe. “The city, they don’t offer us anything for the inconvenience. I don’t know when it’s going to be over.”

The men behind the counter at Kamaran Deli Grocery, at the corner of Gates and Nostrand, said there was some disruption, but not a tremendous loss of business. Still, they were similarly unaware of the city’s plans or a projected completion date for the work.

As of this week, major excavation was in full gear on the roadway north of Fulton Street to about Gates Avenue, with huge open pits, rubble, and dusty streets–like something out of the wild wild west, or as one outlet put it, “hijacked straight out of a third-world country.” From Gates to Greene, the excavation is complete, but the cratered road is in dire need of a makeover. Both of these stretches remain relatively perilous for drivers and pedestrians alike. But north of Clifton Place is sleek, smooth sailing, and a sign of what’s to come. The question is when.

Update: We have reached out to the DDC and were advised that a (1) full reconfiguration of the roadway and (2) installation of select bus service were two separate, overlapping projects with different budgets and timetables. The select bus service project (from Williamsburg all the way to Emmons Avenue) skipped (for now) much of the section of Nostrand Avenue in Bed-Stuy, since newly-installed bus lanes would have to be torn up again in the reconstruction. Instead, select bus service infrastructure will be installed along this section of Nostrand when the reconfiguration of the street is completed this fall.

A statement from the DDC reads as follows:

“We’re upgrading infrastructure on Nostrand Avenue that’s nearly a century old, with new water mains to improve service to homes and businesses, new sewers to improve drainage after storms, and new curbs, sidewalks, streetlights, and traffic signals to provide a more attractive streetscape.  This work, on Nostrand from  Flushing to Atlantic Avenues, began in spring 2012 and is expected to be done this fall.  The project includes Select Bus Service infrastructure on Nostrand between Flushing and Atlantic.  Together with the Select Bus Service infrastructure already completed in a separate project along the rest of the Nostrand Avenue corridor, this project will serve Brooklyn residents well for many generations to come.

“We are committed to being good neighbors throughout the construction process.  DDC has appointed a full-time community construction liaison for the project.  Our liaison serves as a resource and point of contact for the community, answers questions, keeps residents up to date on construction activities, and helps address any concerns the community may have.  The liaison’s contact information is below: 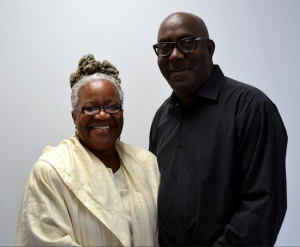 Brooklyn Defender Services reaches out to Brooklynites in Bed-Stuy Brooklyn Bookbeat: Wednesday, Dec. 12 at powerHouse: the history behind Nostradamus