Kudos for NYPD from Heights groups The Fourth of July’s spectacular red, white and blue fireworks display, launched from three barges in the East River and from the Brooklyn Bridge itself, thrilled spectators across New York City and across the country.

Also spectacular, however, were the sheer numbers of visitors who crammed into Brooklyn Bridge Park, the Brooklyn Heights Promenade and other spots along the Brooklyn waterfront Friday night.

Due to the positioning of the barges south of the Brooklyn Bridge, Brooklyn Heights and DUMBO became the go-to venue for the fireworks crowd. Williamsburg and Greenpoint waterfront parks had limited views of the display this year.

Judy Stanton, Executive Director of BHA, praised the work of the 84th Precinct and the Parks Department. “The NYPD did an excellent job of preparation, with a lot of advance notice,” she told the Eagle. “The Parks Department began cleaning the Promenade very soon after the crowds dispersed, and by Saturday it looked perfect to my eyes.

“The DSNY [Department of Sanitation] had the baskets taken up and put back, just as they had advised, and the mechanical brooms were moving around as promised with garbage collections occurring sooner than originally thought,” she said, adding that the visitors she observed heading west from the subways were “well behaved.”

“Except for some older kids who were out and about to set off their own fireworks on State Street,” Stanton said, “people I saw were civil and celebratory.”

Belinda Cape, VP of Strategic Partnerships for Brooklyn Bridge Park, said the park handled the crowds well. “We were assisted by the inclement weather early on,” she told the Eagle. “By fireworks time it was really packed – people were pouring in. But it seems we accommodated everyone, with no incidents. It was cleaned up by the next day, and there’s no damage to speak of.”

Cape estimated that the park held “at least triple” the normal weekend crowd of 100,000 people. “Streets in DUMBO were packed as well.”

The city’s preparations had been extensive. Many Heights streets were closed to vehicular traffic – with the exception of hundreds of emergency vehicles from OEM, NYPD, FDNY and dozens of large, black SUV’s with tinted glass. Ambulances and small, motorized go-carts filled with emergency medical kits were situated on Columbia Heights and Henry Street.

“We can run with these kits through the crowds,” an FDNY EMT told the Eagle.

Spectators were subject to bag checks before entering the Promenade and the park, and residents of Brooklyn Heights and DUMBO were required to show their IDs before being allowed to drive into “frozen zones.” Garbage cans were removed for security purposes.

The Promenade – so packed it was almost impossible to turn around — was closed to spectators well before the start of the show.

An NYPD spokesperson could not provide a crowd estimate, but an officer at the scene told the Eagle that half a million visitors had been anticipated, a figure backed up by observers on the ground.

84th Precinct Captain Maximo Tolentino had said at this month’s community council meeting that “upwards of 290 additional police officers” would be helping out, “plus K9 units, plus counter-terrorism units and a whole slew of other individuals.” In addition, extra transit police were on duty.

After the display wound up, the streets of Brooklyn Heights were filled with thousands headed east towards the subways. Traffic control seemed lacking on Cadman Plaza West as the line for the A train wound for two blocks, and pedestrians walked in the street, some blocking vehicles trying to push their way through the crowd.

The 2 and 3 lines at Clark Street were temporarily closed because crowds attempting to push their way into the trains prevented other patrons from exiting the cars.

But overall, the news was good. Happily, police found a small child who had become separated from his or her family after the fireworks. An NYPD spokesperson told the Eagle that the little girl was successfully reunited with their family, and that, amazingly, she was the only child who had gone missing in the crowd.

The NYPD chased down reports of fireworks being set off across Brooklyn well into the early hours of the morning.

The event marked the return of the Fourth of July fireworks to the East River, and Brooklyn, after spending the past five years on the Hudson. 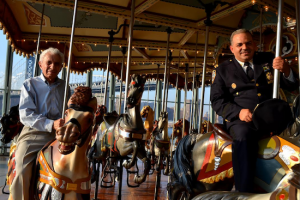