‘Too many uncertainties’ with Brooklyn Health Partners’ bid for LICH Telling a packed Brooklyn courtroom that “a serious decision has to be made,” state Supreme Court Justice Johnny Lee Baynes ruled against Brooklyn Health Partners’ attempt to force the State University of New York (SUNY) to accept their bid for Long Island College Hospital (LICH).

BHP CEO Merrell Schexnydre and investor Harry (Chaim) Miller claimed SUNY did not negotiate in good faith. But they failed to make their case before Justice Baynes on Tuesday.

The ruling frees SUNY to negotiate with the ostensible second-place bidder, developer Peebles Corp., which is not offering to operate the LICH campus as a full-service hospital.

Community groups and doctors plan to contest the final rankings on Thursday, charging that some panelists scoring the bids did not follow the negotiated settlement’s guidelines.

No matter who is ultimately chosen to take over the historic Cobble Hill hospital, the doors are scheduled to close on May 22, leaving thousands of Brooklyn residents without nearby health services or an ER. SUNY plans to shut down LICH’s ER on Thursday.

Justice Baynes said he based his decision on “everything on the record” about BHP’s ability to finance the acquisition of LICH and operate the hospital as described in their proposal.

The judge had asked BHP to provide nine items as proof of financial and medical capacity on Tuesday, including letters of credit attesting to their ability to pay the purchase price of $250 million in non-contingent funds, with a $25 million cash deposit. He also required documentation of BHP’s interim health care arrangements, and proof of the group’s capacity to build a $50 million bridge facility and construct a new $300 million hospital.

Attorneys representing SUNY, the state Department of Health and the New York State Nurses Association (NYSNA) argued that BHP’s proof of financial capability was flimsy and hastily assembled, and at best involved loans at rates so high that the hospital would fall into foreclosure.

According to SUNY’s attorneys, BHP obtained a loan commitment from Madison Realty Capital which was subject to an interest rate of prime plus 8 percent, payable in 24 months – with all interest payable up front at closing. “That’s no less than 12 percent,” said SUNY attorney Frank Carone. “Guess who would own the property? Madison Realty Capital when they foreclose. That’s bad business.”

SUNY’s attorneys also argued that BHP’s latest health care Strategic Plan, dated May 9, appeared to be pasted in from a “hodge-podge of websites,” was vague on the topic of obtaining an operating license, and did not follow through on BHP’s promise to provide a functioning ER and other services during the transition period.

“It reminds me of my kids throwing their homework together Monday morning when they didn’t do it over the weekend,” said Kenneth Fisher, representing the Downstate at LICH Holding Company. “An ICU? There’s just cut-and-pasted language from documents submitted by architects and construction companies to patch and repair the deficiencies.”

In their latest plan, BHP said they planned to open an “Urgent Health Care Center” on May 23, and also offer health education about the “overuse of emergency rooms.” Towards the end of the summer BHP would add ambulatory care and then an ER, with a 100-bed bridge hospital opening by December 1.

According to the plan, BHP would obtain a “Letter of Commitment” from a supporting medical provider along with an “extension Article 28 that would allow the right to operate as a medical facility.”

Emphasizing that SUNY would in no way share University Hospital of Brooklyn’s operating license with BHP, Fisher said, “They concede they can’t expect an Article 28 operating license for the bridge facility by May 22.”

“Compare this with what BHP promised in their proposal,” said NYSNA attorney Richard Seltzer. “The bridge facility, which was to begin a day after SUNY leaves on May 22, has been reduced to an urgent care center and that’s all. This is not what is in the proposal. This is not why they were ranked number one [in the RFP bidding process].  They cannot deliver what they promised.”

Seltzer said plan was “riddled with contingencies, possibilities, changes. You almost need a scorecard. Every day it’s a new group doing a new thing. There is no there there. The emperor has no clothes. It’s time to stop the music and implement the RFP as planned.”

BHP attorney Donald Kravitz tried to explain the glitches that delayed the submission of the required $25 million deposit. “Last Thursday I had in my hand checks payable to SUNY,” he said. The checks, however, should have been made out to the court, not SUNY, and an order from the judge had to be obtained before the clerk could accept it, Kravitz said.

Justice Baynes gave short shrift to Kravitz’s explanations, and noted that the check rejected by the court clerk was dated May 9, not May 8 as originally required.

Kravitz also complained that SUNY never provided a draft sales agreement, leases, or a copy of the “all-important deeds,” and blamed SUNY for “communication problems” during the negotiations.

BHP’s court fumbles did not help their legal case, however. The non-appearance of BHP’s health attorney Mark Zaphron, said to be stuck on a plane during Tuesday’s hearing, was received poorly by Justice Baynes.

And the fact that BHP allowed corporate officer Larry English –licensed to practice law in Louisiana but not in New York — to represent the group in court last week also troubled the judge, who limited Mr. English to yes or no answers on Tuesday.

“My concern is that individuals are acting in good faith,” Baynes said.

In the end, Justice Baynes ruled against BHP. “I said last week – your word is your bond. I thought Mr. Seltzer said it best. There are too many uncertainties here. I’m denying your application.”

Immediately after the decision, English told the Brooklyn Eagle, “We’re disappointed. I hope the people in the community get the full-service hospital they need.”

LICH advocates had praise for Justice Baynes, who they called “more than fair,” but fear the decision leaves the hospital in limbo. More than 20,000 patients visited LICH’s ER over the last year, and 182 dialysis patients will be left in the cold after May 22.

“I’m very, very upset,” said Dr. Pinar Atakent, chair of Rehabilitative Medicine at LICH since 1981. “I don’t think we can tolerate more struggle and the unknowns about the future of LICH.”

“I think it was a missed opportunity,” said Susan Raboy, spokesperson for Patients for LICH. “It could have been something good, but the message got lost. Where will the patients, doctors and nurses go a week from Friday?”

Back in court on Thursday

Attorney Jim Walden, of Gibson, Dunn & Crutcher, said that six community groups and the Concerned Physicians of LICH will be contesting the ranking of the bids on Thursday.

According to the legal settlement, panelists were supposed to rank proposals providing full-service hospitals higher than proposals offering fewer medical services. Six of the evaluators, however, gave their highest score to non-hospital operators.

If the groups’ request is successful, a full-service hospital proposal by the Prime Healthcare Foundation could move into second place, knocking Peebles into third.

“We are grateful that BHP put together an ambitious proposal, but we must respect the Court’s decision and move forward together as a community,” Walden said. “We remain committed to our core principles and objectives as we enter into discussions with Peebles and prepare to argue our motion on Thursday.”

Jeff Strabone, spokesperson for the Cobble Hill Association, one of the six community groups in the litigation, told the Eagle, “We look forward to Thursday when Justice Baynes will hear our motion to disregard RFP scores that disregarded the instructions to score hospitals higher than non-hospitals. Justice is still possible.”

Long-time LICH nurse Maribel Agusto told the Eagle, “I hope they reorganize the list rankings; numbers two and three aren’t acceptable.” She added, “That fight will be on Thursday.”

Donnette Dunbar, spokesperson for BHP, said in a statement that the group was still considering whether to press forward. “Brooklyn Health Partners is meeting with its attorneys to determine next steps. We remain committed in providing the community of Brooklyn with a full-service hospital.”

Moses Reser, affiliated with BHP investor Harry  Miller, said the group was headed for the Court of Appeals Tuesday afternoon. “We’re asking them to issue a stay and appeal,” he said. “We definitely have a shot at an appeal. We’re going to fight this all the way.”

The RFP’s bidding rules and deadline were hammered out under the guidance of Justice Baynes by attorneys for the LICH coalition, SUNY and the DOH after more than a year of hard-fought litigation.

Another litigant, Dr. Jon Berall, is also contesting the ranking of the bids. 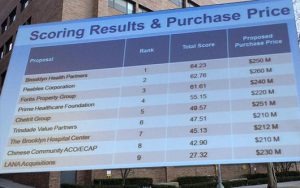