The Bedford-Stuyvesant Restoration Corp. (“Restoration”) marked its latest accomplishment Tuesday by celebrating the $20 million construction of a new public plaza and completion of mile-long streetscape improvements on a key commercial corridor of the neighborhood, Fulton Street.

“We are standing in what was the middle of the road a year ago,” Assistant Transportation Commissioner Andy Wiley-Schwartz told guests gathered at Marcy Plaza, an inviting, landscaped expanse between Fulton and MacDonough Streets with seating and a gorgeous mosaic art work embedded in the concrete.

“Now we can sit down here and rest and meet our friends,” he said.

The city of New York paid for the $20 million Fulton Street beautification project – which in turn sparked $91 million in private-sector investment that created some 300 units of mixed-income housing and more than 40,000 square feet of commercial space in Bed-Stuy, officials said.

And Citigroup made a $15 million investment to renovate iconic Restoration Plaza, a long-established public space on the opposite side of Fulton Street from Marcy Plaza.

Improvements to Restoration Plaza include a “wall of fame” – huge blue murals with larger-than-life portraits of the community development group’s founders and other luminaries including President Obama and the late Shirley Chisholm, the first African-American woman to serve in Congress.

Restoration – set up by New York’s senators in 1967 as America’s first community development corporation – has partnered with Bed-Stuy residents and businesses in good times and bad to boost economic self-sufficiency, enhance family stability and growth, promote the arts and culture and improve neighborhood safety.

“We aspire to help achieve whatever the community’s dreams are,” Restoration CEO Colvin Grannum said.

City Councilman Albert Vann (D-Bedford-Stuyvesant, Crown Heights), a member of Restoration’s founding board, recalled that in bad times when “communities were quickly deteriorating … Restoration was able to stem the tide.”

Marcy Plaza has become a venue for farmers’ markets and open-air performances. For instance, as part of the Brooklyn BEAT Festival, on Sept. 18, theater troupe Third Rail Projects will stage “Roadside Attraction,” a dance and theater performance whose setting is a 1970s-vintage camper.

Besides being a destination unto itself, Marcy Plaza attracts shoppers to Fulton Street, said Wiley-Schwartz – who later told reporters that neighborhood residents wrote letters of support for the plaza, which is one of about 50 citywide that has been built or is in development.

DOT gets 12 to 15 applications each year for plaza construction, and can take on two to four projects annually depending on how much funding is available, he said.

Other city agencies were involved in Fulton Street’s beautification, including the Department of Small Business Services and the Parks Department. Borough President Marty Markowitz and the City Council also played a role.

The Department of Cultural Affairs and the Economic Development Corp. commissioned Marcy Plaza’s 20-foot-in-diameter ceramic mosaic through their Percent for Art Program. 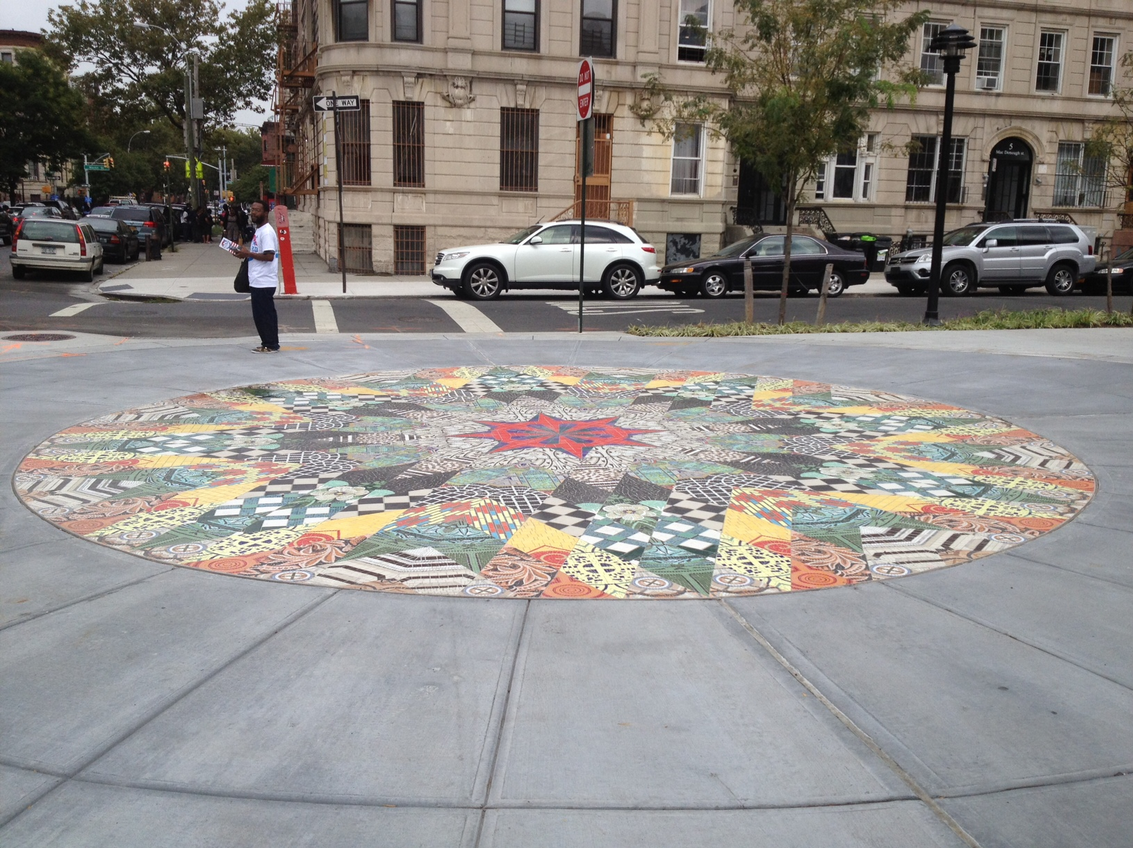 Artist Ellen Harvey, who lives in Williamsburg, created her work “Mathematical Star” to look like a giant quilt. The quilt pieces are patterns inspired by colorful architectural elements from 18 historically significant Bed-Stuy locations.

Members of Community Board 3, whose terrain is Bed-Stuy, picked the historic sites that were included in the mosaic – such as Bridge Street African Wesleyan Methodist Church on Stuyvesant Avenue and Boys School on Marcy Avenue.

Monique Greenwood was thrilled that Akwaaba Mansion, her MacDonough Street bed and breakfast, is featured in the mosaic. A detail from a yellow and red banner that hangs outside her house is part of its design.

“It’s just a beautiful piece of work,” she said.