Just about one in six of the 49,000 businesses in Brooklyn are food related which accounts for 12.5 percent of the 472,000 private sector jobs, according to the Winter 2012 Brooklyn Labor Market Review. It’s the second largest industry in the borough, only surpassed by health care.

Brooklyn Eats, a free-to-the-public food and beverage manufacturing trade show in East Williamsburg, showcased this on Wednesday as more than 100 different food vendors from all over the borough we represented.

“Brooklyn really is becoming the foodie capital of America, and probably the world, so we’re extremely proud to be a part of this,” said Ari Botsford from Whimsical Confections.

While Brooklyn Eats was established in 1997, up until this year it focused on promoting restaurants. This year it was all about the people who manufacture the food as opposed to those who cook it. Hosted by the Brooklyn Chamber of Commerce, there were 110 vendors in attendance, all from Brooklyn, including those who make chocolate, soda, kimchi, beer, bagels, rugelach, ice pops, beef patties, smoked fish, cookies, jam, wine, pies, cakes, jerky, gin and other products.

In addition to its new focus on manufacturing, this year’s Brooklyn Eats also opened to the public and was free for the first time. The event easily brought in more than 1,000 people.

“There aren’t a lot of trade shows that are open to the public,” Daniel Dengrove of Brewla said. “This is like Disney World for [the attendees] because there are so many great places here and they get to walk around trying all of this food for free.”

Brooklyn Eats attracted both old and new companies, as well as those that haven’t even launched their products yet but were there to network, get their brands out there, and even to try some food themselves.

For many companies, like Kombucha Brooklyn, which has made lightly fermented teas since 2007, this event was all about networking with other small businesses.

“It’s a networking thing,” Kombucha’s production operations manager Chris Strait explained. “We weren’t necessarily trying to sell our products. It’s about sharing ideas with other like-minded people. If we are able to sell some product at the same time, then all the better.”

Some companies saw Brooklyn Eats as a great opportunity to promote their brand to the general public. Owl’s Brew, which creates teas designed to be mixed with liquor, isn’t planning on launching its products until July, but used Brooklyn Eats to publicize their name.

“We’re a new brand so getting our name out there is big,” Maria Littlefield said. “Especially with our product, tea cocktails, it’s about education. It’s so important for people to come and try it to understand what it is.”

Karen Marshall from Fred’s Marshmallows was among those looking to expose her brand since she only started the company in March. And while she hoped to have the chance to sample some product, too, she couldn’t because she was too busy working. “It’s been so busy I haven’t even been able to leave my booth,” she said.

Marshall wasn’t the only one who noticed how successful the event went. “This has been one of the most well-organized events of this kind that I’ve been to,”said Lisa Ainbinder of Tumbador, a company that makes custom, hand-made chocolates. “Most places promise a crowd like this and then don’t deliver.”

The day-long event also consisted of informational panels that taught small business how to cut energy costs and cooking demos for vegetarians, among other workshops. 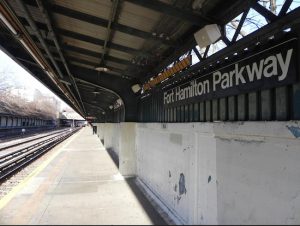