A rectangular grid of streets in Boerum Hill and Gowanus has been designated Brooklyn’s first Neighborhood Slow Zone by the New York City Department of Transportation (DOT).  If all goes as planned, signage and street markings will soon be added to the already installed speed bumps and painted street grids to indicate that in this neighborhood the speed limit has been reduced from 30 m.p.h. to 20.

Howard Kolins, president of the Boerum Hill Association, explained that the Boerum Hill citizens’ group had been concerned about the number of accidents, sometimes resulting in fatalities, for a number of years.  Researching how other cities dealt with the problem, board members focused on slow zone programs in Western Europe, the implementation of which resulted in a 46 percent reduction in fatal and severe injury crashes in London compared to untreated areas.  In the Netherlands the average decrease in injuries was 25 percent, and Barcelona boasted a 27 percent drop.  Similar programs have also been adopted in Berlin, Zurich, Dublin, Stockholm, and Helsinki.

And the positive side effects of the programs are nothing to sniff at either.  The implementation of slow zones in Europe has led to reductions in cut-through traffic and to less traffic noise in residential neighborhoods.  After all, what kind of dedicated speed demon wants to slow down to five m.p.h. when approaching a speed bump?  What’s more, the London study concluded that crashes did not increase in adjacent non-slow zone areas.

Armed with these impressive stats, the BHA approached DOT three years ago only to learn that the agency already had slow zones on its radar.  Boerum Hill was hopeful that the community would become the pilot NYC program, but ultimately a neighborhood in the Bronx was chosen.  However, a grid in Boerum Hill and Gowanus, incorporating streets in Community Boards 2 and 6, has the honor of being the first Neighborhood Slow Zone in Brooklyn.  The section stretches from the south side of Atlantic Avenue to the north side of Union Street, and the east side of Smith Street to the west side of Third Avenue.

According to the DOT website, in order to be considered for Neighborhood Slow Zone status, an area must be primarily residential and roughly one quarter square mile in size, with strong boundaries such as major streets, highways, large parks, or elevated train tracks.  Zones that contain fire stations, hospitals, or truck routes (except on the boundary) are not considered.  However, facilities such as schools (the Brooklyn slow zone has four schools within its streets) and senior centers are a plus for designation.

Applications must be endorsed by involved community boards, and approval is aided by letters of support from key stakeholders, such as local elected officials.  City Councilmember Stephen Levin was “greatly concerned” by the local speeding problem, Howard Kolins noted, and it was Levin’s office that submitted the successful application.  Among the other supporters were State Senator Velmanette Montgomery and Assemblywoman Joan Millman.

Fourteen speed bumps have been added to the five that already exist within the slow zone.  Eleven gateways, which announce the presence of a zone, will soon appear.  A gateway is a set of signs and markings at an intersection to alert drivers to the reduced speed limit.  According to Kolins, a typical gateway will have two signs—one on the sidewalk and one in the street where a concrete pylon is placed over the street marking.

There was pushback from a few residents about the program, Kolins admitted.  Most complained about the loss of parking spaces due to the gateway signage.  Originally two spaces were to be lost at each of the eleven designated intersections, but negotiations with DOT brought that number down to one space per intersection.

Such accommodation was not unusual during discussions with DOT, Kolins stated.  He said that the city agency has been “cordial, pleasant, and honest, and willing to go back and look a second and third time” at issues brought to them by the community groups involved.

Although all Neighborhood Slow Zones are intended to be self-enforcing, Howard Kolins revealed that the 84th Precinct has agreed to discuss some police enforcement practices to kick-start the new program. 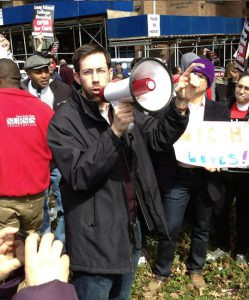