Many Gerritsen Beach homeowners are still dealing with the impact of Superstorm Sandy. Eagle photos by Rob Abruzzese
Share this:

As summer approaches, non-profits are redoubling their efforts to clean up the foul fungus lurking in hundreds of homes in Gerritsen Beach, a peninsula where a 10-foot storm surge during the Oct. 29 hurricane flooded nearly all 1,800 houses in the neighborhood.

“It is, in a sense, a race against the clock to take proper care of as many people in a short a time as possible,” said Nicole DeLeon, a relief coordinator from the Stephen Siller Tunnel to Towers Foundation.

“These are the most important months before it gets really hot and mold starts spreading rampantly,” said DeLeon, whose organization is providing rigorous cleanup by professionally trained crews free of charge in Gerritsen Beach.

“Think of those summer months when it’s 90 degrees and the humidity is high – mold loves that.”

Exposure to the hard-to-eradicate fungus can trigger a host of ailments from asthma attacks and breathing disorders to headaches, rashes, nausea and memory loss, experts say.

The foundation – which honors firefighter Stephen Siller from Squad 1’s firehouse in Park Slope, who died on 9/11 after running through the Brooklyn Battery Tunnel to aid in rescue work – is one of three charities helping cash-strapped neighborhood residents fight mold.

If homes need to be gutted to clear out moldy sub-floors, sheetrock and other damaged materials, New York Cares picks up the tab. Another group, HEART 9/11, provides construction materials and laborers to rebuild once the mold remediation is done.

Many residents in the working-class neighborhood already spent big to fix up their storm-damaged homes and don’t have a dime left to deal with lingering mold.

“No one in the neighborhood ended up getting near enough money from FEMA or insurance to begin to cover their losses,” said Jameson Wells, executive director of the Gerritsen Beach Long Term Recovery Project.

“We ran though our savings, borrowed from relatives, decimated our 401(k)s and ran up our credit cards.”

The Gerritsen Beach group is working with the other three non-profits by doing in-house assessments to check homes for mold. It’s also kicking in money for supplies such as special paint that mold can’t grow on and working to raise additional funds to cover temporary housing for people whose mold-infested houses require extensive rebuilding.

Work on 70 neighborhood homes has been completed since the anti-mold program launched in March, and hundreds more need the cleanup.

Of more than 300 Gerritsen Beach homes that have been assessed, only one in 35 does not have a mold problem, Wells said. Additional residents continue to turn up asking for help at the Gerritsen Beach group’s trailer, on loan from Park Slope actor Steve Buscemi, the “Empire Boardwalk” star.

“Mold is definitely my enemy,” said Margaret French, whose family spent $38,000 to repair their Dictum Court house after Sandy flooding – then had to tear out all the repairs and start over again after mold she couldn’t see sickened two of her children.

“It felt like we had a second hurricane,” French – whose grandmother bought the house in 1921 and whose mother was born in it – said of discovering mold behind the exterior siding of her house and in the sub-floors of her renovated home.

Many people in the neighborhood are third-generation Gerritsen Beach residents.

When workers ripped out her newly installed sheetrock for a look, there was mold all over the place.

The family had the house checked for mold after doctors at Coney Island Hospital diagnosed her 8-year old daughter with “mold sensitivity” when the child was stricken with dizziness, chronic headaches, stomach pains and lethargy. Also, her 7-year-old son had trouble with his vision, and his glasses weren’t the problem.

The non-profits are covering the costs of French’s mold cleanup and rebuilding, which she expects will take until August to complete.

At the Ira Court home of Lorrie Barreto, white mold that looks like baby powder became visible on the basement ceiling months after post-Sandy repairs were done with $16,000 in combined FEMA and insurance payouts and $12,000 of family money.

Tuesday, Tunnel to Towers dispatched a crew wearing canister masks and disposable haz-mat suits to the house to start the mold cleanup process.

“A lot of people think they’re okay – they need the experts to check and make sure,” said the retired NYPD detective.

Many neighborhood residents are police officers or retirees like Barreto, or transit workers, firefighters, teachers or nurses.

The heavily Irish-Italian enclave, which has nearly 8,000 residents, is a former marshland that was developed in the 1920s by a company called Realty Associates. A creek in the middle of the peninsula was dredged to create Shell Bank Canal and streets were laid out and given names in alphabetical order.

On many blocks in the community, the houses stand two or three feet apart.

But nothing prepared him for the distress of recently discovering mold in his own basement, which was carefully renovated during post-Sandy home repairs that kept him and his wife Mary out of their Keen Court house until March.

“It was complete horror,” said the retired UPS driver; Mary has chronic obstructive pulmonary disease (COPD) and is allergic to mold. The couple has signed up for Tunnel to Towers’ free mold cleanup.

Finding the fungus was awful – but being in denial would be worse, he argued.

“We fear some people will come to terms with the mold problem too late,” he said.

“I don’t want that to happen. We want to avert a health crisis.” 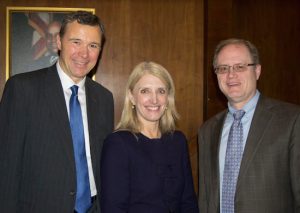