“Flower Power,” a 1960s expression popularized by hippies and all but forgotten over the years, is making a comeback, at least in the Brooklyn art world. Dozens of young students, inspired by Georgia O’Keefe, painted their own versions of the legendary artist’s study of a flower for an exhibition mounted by the owners of The Art Room, a school-gallery in Bay Ridge.

Called “Flower Power,” the exhibition took place on April 27 at The Art Room, at 8710 Third Ave., attracting a steady stream of visitors throughout the day. The young artists, who take classes after school in The Art Room, ranged in age from nursery school students to 12-year-old junior high kids.

Leigh Holliday Brannan, owner and head teacher, and her mother-in-law, Mary Immaculata Brannan, a teacher, lovingly displayed their students’ work to best advantage, framing and hanging the paintings as if they were being featured in an exhibition at the Metropolitan Museum of Art. “We’re very proud of them,” Holliday Brannan told the Brooklyn daily Eagle.

The show featured the works of 96 children. Using O’Keefe’s work “Petunia No. 2” as a starting point, the kids used oil pastels, water colors, and tempera to create their own close-up views of flowers. Before the young artists put brushes to paper, however, Holliday Brannan and Immaculata Brannan had them study the details of flowers by looking at them through magnifying glasses so that they could see and understand the detail in the flowers. O’Keefe (1887-1986) was fascinated by detail, as evidenced by a quote attributed to the great artist on the Biography Channel website. “When you take a flower in your hand and really look at it, it’s your world for the moment. I want to give that world to someone else,” she stated.

When it came time to begin painting, “we let the children pick their own colors,” Immaculata Brannan said. This gave the children a chance to really express themselves, she added. And they did! Gabriella Garomo painted a pink background with her light blue flower. Ava Elfont chose to create a flower with shades of blue and purple in it. Silvia Mancini’s work featured a more realistic looking flower featuring shades of yellow and orange in it, along with green leaves.

Katie Feder, a fifth grader at PS 185 in Bay Ridge, contemplated nature when creating her version of O’Keefe’s flower. Her work was filled with blues and greens and her flower started with lighter shades near the center that expanded out to darker colors on the pedals. “Blue is for water. Green is for the earth,” she said. O’Keefe is one of her favorite artists, Katie said. “With Georgia O’Keefe, a lot of it is about nature. She captures every detail in nature. Katie said she also likes the work of Pablo Picasso. She completed her flower painting in two sessions at The Art Room.

On the opposite wall Gianna Fasciano’s flower painting could be found. Gianna, a first grader at Saint Bernadette Catholic School, in Dyker Heights, takes lessons at The Art Room once a week, her mother Isabel Fasciano said. “She loves the experience. I think it’s important. I don’t think children get enough art in school,” Isabel said.

The Art Room, owned by Holliday Brannan and her husband Justin Brannan, opened three years ago. The storefront school offers lessons in painting, drawing, design, and sculpture to children and adults in groups or individually. The school also welcomes visiting artists at exhibitions. 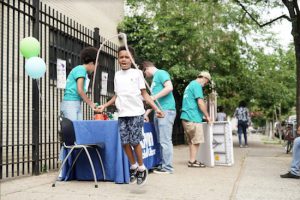