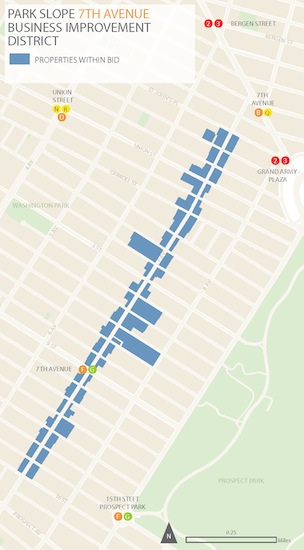 Plans to establish a business improvement district on one of Brooklyn’s trendiest shopping streets – 7th Avenue in Park Slope – are moving along on schedule, according to a leader of the organizing group.

Tammy Shaw, chairman of the Steering Committee for the Park Slope Chamber of Commerce, said the business group has filed an application with the New York City Department of Small Business Services to set up a BID on a 16-block stretch of 7th Avenue from St. John’s Place to 16th Street. There are approximately 300 stores in the zone, Shaw said.

Under the city’s regulations governing BIDS, sponsors must demonstrate that there is community support for the idea of setting up a BID. On March 18, Shaw made a presentation to Community Board Six’s Economic and Waterfront Development Committee. In addition, a majority of building owners in the proposed BID area must agree to the idea or the BID dies.

The chamber has set up a website with information about its BID plans. The website contains a map of the proposed area, as well as information on budgets.

There are 67 business improvement districts in New York City and 23 in Brooklyn, including one on 5th Avenue in Park Slope, according to the Dept. of Small Business website. Times Square, Herald Square, and Greenwich Village all have BIDs.

A BID is a public/private partnership between the city and property owners in a commercial area. A BID is funded by property owners in the designated BID area, who agree to pay an added assessment on their city real estate taxes. The amount each property owner pays is determined by a formula set by the BID’s sponsor and usually takes into consideration the size of the property. Churches, schools, and medical institutions are exempt from having to pay into the BID. The stretch of 7th Avenue where the chamber is looking to set up a BID includes the emergency room entrance of The New York Methodist Hospital, on 7th Avenue and 6th Street. The hospital will not be required to pay into the BID.

The funds are pooled and used to pay for such amenities as supplemental sanitation services, decorative holiday street lights, sales promotions, and private security street patrols.

The funds also pay the salary of an executive director to run the day to day operations of the BID. A board of directors, whose members include property owners, merchants, residents, and elected officials, oversees the BID and makes all of the major decisions.

In a Feb. 12 letter to Small Business Services Commissioner Robert Walsh, Levin wrote that a BID on the avenue “would provide much needed services that create a cleaner environment for visitors and residents while providing a safe environment.”

The BID would be in a position of advocating “for all businesses and property owners for capital improvements as well as other city investments that will result in higher revenue and economic prosperity,” Levin wrote.

Levin’s support is important because the BID proposal will ultimately have to win City Council approval.

Shaw said the chamber is proposing a $300,000 annual budget for the 7th Avenue BID. Storeowners have indicated to the chamber that they’d like to see a good portion of the money used for sanitation services. When the chamber sent out a needs survey to gauge the views of merchants and property owners, 653 responses came back. “The highest response involved sanitation issues; trash overflowing from litter baskets, litter on the sidewalk, graffiti,” she said.

The chamber’s goal in establishing a BID is to promote the avenue as a great place to shop, according to Shaw. A vibrant avenue will have a positive effect on the entire Park Slope community, she said. “We have a beautiful avenue and one of the best neighborhoods in the city,” she said.

But the chamber, made up of 100 volunteers, doesn’t have the funds to do justice to 7th Avenue, Shaw, owner of TB Shaw Realty Associates, said. “We’re all volunteers who have our own businesses to run. Right now, we don’t have the budget to promote 7th Avenue,” she said.

Shaw estimated that the process toward wining final approval and getting the new BID up and running would take another nine months.