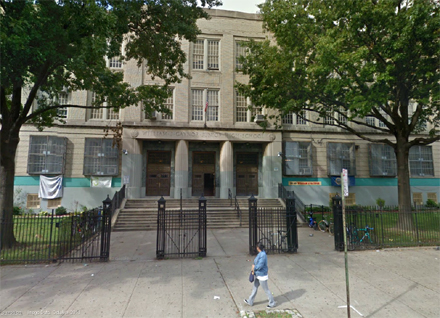 The Brooklyn Latin School, one of the city’s highly-touted specialized high schools, will be relocating from Bushwick to East Williamsburg this September, trading places with The Young Women’s Leadership School of Brooklyn, an all-girls upper school.

The move is an upgrade for Brooklyn Latin, which has been located in the top two floors of elementary school building P.S. 147, at 325 Bushwick Avenue.

The new location inside I.S. 49, at 223 Graham Avenue, will provide Brooklyn Latin with a regulation-size gym, a spacious auditorium, an art studio, new science labs, a cafeteria and an outdoor space that can be used for sports.

“Brooklyn Latin is increasingly becoming a first choice among some of the city’s brightest students, but the absence of a gym prevented us from competing in PSAL sports and discouraged some potential attendees,” Jason K. Griffiths, headmaster and founder of Brooklyn Latin, said in a statement.

“Our new home is a classic New York City high school with excellent athletic facilities, an auditorium that can accommodate the entire TBLS community, new science labs, an art studio, and an outdoor space for sports,” he added. “It is also located in a vibrant neighborhood convenient to subways and just two blocks from Grand Street.”

Brooklyn Latin will share the 155,000-square-foot facility on Graham Avenue with two other schools: The Green School: An Academy for Environmental Careers (9-12); and the Lyons Community School (6-12).

Modeled after Boston Latin, the nation’s oldest public school, Brooklyn Latin offers “a private education in a public school setting,” and is one of only two New York City public high schools to require all students to participate in the International Baccalaureate (IB) Program. The school is known as the most diverse of the city’s eight selective, specialized high schools.

The Mayor’s Panel for Educational Police (PEP) approved the move in December.