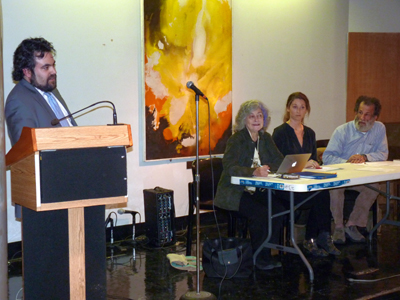 Before the meeting was over a new group had formed, vowing to fight the proposal.

The plan calls for rebuilding the Heights branch inside a smaller, city-owned condo space on the first floor of a new, privately-owned residential development, and moving the Business branch to the Central Library at Grand Army Plaza in Prospect Heights.

“There are a lot of rumors about what the future of this building is,” Josh Nachowitz, Brooklyn Public Library’s Vice President of Government and Community Relations, told a crowd of roughly 50.

“Brooklyn Public Library has no intention of abandoning Brooklyn Heights. But service is hampered by the physical condition of the building. The entire HVAC [air conditioning] system needs to be fixed and that will cost three-and-a-half million dollars,” he said, adding that other building repairs would raise the total cost of renovation to $9 million.

The entire BPL system “has $230 million in capitol needs systemwide, and we get $15 million a year from the city,” he said. “We don’t have the money.”

“There’s tremendous real estate value inherent in this location,” Nachowitz said. “We have a real opportunity to deliver a 21st century library the neighborhood deserves at little or no cost.”

While Nachowitz tried to paint the plan as “an exciting opportunity for the neighborhood,” many in the audience were not buying. Carolyn McIntyre called the plan “a tragic decision.”

“I’m concerned that the city is taking more and more public buildings and putting them into the hands of private developers,” she said. “It’s happening in the schools. We saw what happened when [Forest City Ratner developer Bruce] Ratner was allowed to use public domain to enrich himself. The neighborhood needs to push back, just as it did against Robert Moses.”

Others worried that a backroom deal with a developer had already been made.

“It’s virtually impossible for the public to make sure there will be a fair deal and an honest bid,” said attorney Michael White, adding, “The last time the site was cleared 30 years ago [for the erection of the adjacent One Pierrepont Plaza], it was handed to a developer on a non-bid basis. Who do we demand integrity from — you [BPL] or the city?”

“I resent the implication the Library is not acting with integrity,” Nachowitz replied, seemingly taken aback with the turn the meeting had taken. “The process demands community input, participation of elected officials, the Community Board and community groups. Our goal is to provide a public service and keep the doors open.” The city, not the Library, would craft a Request for Proposals (RFP), he said.

Another attendee demanded to know if the Library would “rule out doing business with Forest City Ratner.”

“Absolutely not,” Nachowitz said. “BPL is a tenant; the city would sell the building.”

Councilmember Steve Levin, chair of the subcommittee on dispositions, reassured the crowd. “The City Council has a real role, so the public has a voice. It’s not a fait accompli.

“In contrast to the Empire State Development Corporation at Atlantic Yards, this goes through the ULURP (Uniform Land Use Review Procedure) process,” he said.

When asked what other options besides selling the building the Library had considered, Nachowitz pointed out the difficulty of raising money for infrastructure. “It’s extraordinarily difficult to do,” he said.

Under the plan, the library would shrink from 62,000 square feet to 15,000 square feet, Nachowitz said. He insisted that the Heights branch would be “the same size or bigger than the present branch,” since more than 50 percent of the current building is used for archival storage, with the rest of the space shared between the Heights and Business branches.

Nachowitz said that the Heights branch would be moved to a temporary location during the work. “While I can’t tell you how long, the standard is 18 months.”

“My greatest concern is that . . . the branch library will become a stepchild with no home for the years that it will take to build its new home,” said Deborah Hallen, secretary of the FBHBL.

“It is totally unacceptable to the Friends that the library could be housed in a trailer or a book mobile during new construction,” she said. “We also want to know what will be happening with our current library building during the summer of 2013.”

“We all know how scarce space is around here,” commented Judy Stanton, executive director of the Brooklyn Heights Association. “How much control of the calendar will BPL have with respect to the temporary library?”

“As much control as we possibly can. It’s a long process,” Nachowitz said. “Our goal is to provide continuous service. We’ll work with the city to figure out a timetable.” He said the library has not calculated the cost of a temporary library, however. “Ideally, the developer will help pay for the temporary space.”

Stanton also asked Nachowitz to “specifically commit yourself to forming an advisory committee,” a small group limited to Friends of the Library trustees. After the meeting, Ms. Stanton explained that she was referring to a committee to facilitate FBHBL input into the design of the new space, should that come to pass.

Addressing concerns about keeping the present library in operation until construction begins, Nachowitz said the library was considering “some reduced hours in July and August.” He said the library had considered other options, such as a diesel generator during the summer months, but ruled them out for practical reasons, including fumes.

Others questioned why the Library was moving the Business & Career Library from business-oriented Downtown Brooklyn to sleepy Prospect Heights.

Moving the business library is considered a “strategic relocation,” Nachowitz said. “The Business & Career Library is designed to serve small businesses and career seekers throughout Brooklyn, not just Downtown. Moving the Business library will combine and leverage the services BPL provides — the job and information center and huge visitorships at the Central branch.”

Collections would be “consolidated” at the Central branch to make room for the business library, he said.

“We have 18 computers in the Business library and only 5 or 6 upstairs,” an audience member said. “How many computers do you envision [in the Heights branch]?”

“As much technology as we can,” Nashowitz said.

While some audience members said the Central branch was served by fewer subways and was less convenient for businesses, Maud Quintana, Program and Outreach Librarian at the Business library said she welcomed the move. “Our new mission is heavily related to jobs,” she said. She said the “vast majority of participants in the Power Up program” came from Zip codes in central Brooklyn. “It’s not a leap of faith to say the library could be outside this neighborhood.”

After the meeting, a group opposed to the plan gathered around Councilman Levin. “I’m glad the meeting took place and it’s out in the community,” he said. “Now the community needs to have a real role. Don’t think there’s any foregone conclusion.”

Story updated for clarity 1/31/13 with a quote from Judy Stanton, Executive Director of the Brooklyn Heights Association.