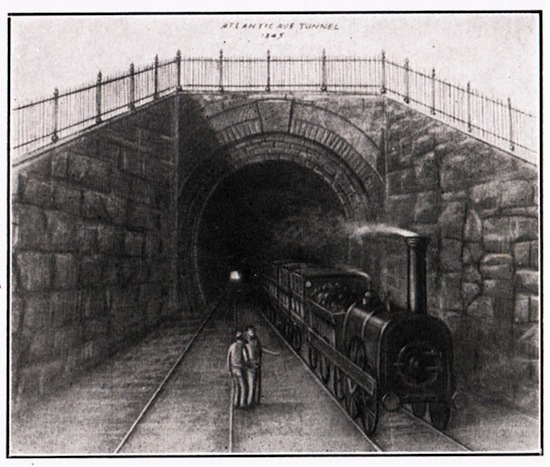 The last time we checked in on the long-running story of railroad buff Bob Diamond vs. the city Department of Transportation, Diamond was collaborating with National Geographic TV on a documentary about the Long Island Rail Road’s former Atlantic Avenue tunnel, which he had discovered in the 1980s.

At the same time, he had hired experts to take tests, using a device called a magnetometer, to see whether there was any large metallic object under the avenue. Diamond has long maintained that in 1864, when the LIRR was filling in the tunnel, it left an obsolete, 1830s-era locomotive behind a walled-in section.

The documentary was never completed. In December 2010, the Fire Department and the DOT revoked the city’s previous approval that gave Diamond permission to use the tunnel. Until then, Diamond’s tours of the abandoned tunnel were a popular Heights and Cobble Hill attraction.

The report also mentioned a “blip to the east,” a smaller object. All in all, it said the high magnetometer readings could not have been caused by sub-surface utility cables or pipes.

The fact that Diamond is releasing this report, made in early 2011, now may means that he now thinks he has a better shot at getting the city to allow him back into the tunnel – and to allow National Geographic to finish shooting the documentary.

In an e-mail to the Eagle, Diamond pointed out that former DOT Executive Director Anne Koenig, who had informed Diamond that he no longer had permission to enter the tunnel, had resigned from the agency. She now holds a position with the Office of the Deputy Mayor for Health and Human Services.

“Hopefully,” said Diamond, “the new people at the DOT will see this project in a more positive light, especially since there really is a true historical treasure buried only 11 feet below Atlantic Avenue.”

Responding to this newspaper on behalf of the DOT, a spokesperson for the city Law Department said the DOT could not comment because there are still outstanding litigation issues between Diamond and the agency.

As for the National Geographic Channel, Diamond told the Eagle, “They spent over $130,000 out of a $440,000 budget, they have a lot of money invested already … I think it would make good business sense for them to complete what they began.”

Diamond, on his website, identified the locomotive as the circa-1836 “Hicksville,” which the railway retired from service in 1848 and called “not worth repairing” in 1853.

The Atlantic Avenue Tunnel was sealed off in 1864, only 20 years after it had been put into service, after real estate interests succeeded in banning steam trains from Brooklyn.

The current LIRR Atlantic Avenue line, which terminates at Flatbush Avenue, was built later in the 19th century.

The FDNY banned Diamond from the tunnel as he was about to host a film showing there, followed by the DOT. The film showing would have brought more people to the tunnel, which is accessible through a manhole, than the tours. Fire officials have said that their main concern was for the safety of the people in the tunnel, although Diamond insisted it was safe.