Manuela Filiaci: “Poems That I Cannot Write and Wish I Could.” March 23–April 22. Filiaci is an Italian-born, New York-based painter whose works can be described as diagrammatic and romantic.

“From Caruso to Cunningham.” Through August. A special archival exhibition delving into BAM’s rich history, a century and a half in the making. Original documents, archival video, photographs and more illuminate the moments, memories and cultural happenings that have transpired both on and off its stages. Curator David Harper and archivist Sharon Lehner co-curate this free exhibition.

“Mystics: A Blessed Rage for Order.” Through April 28. Curated by Elizabeth Ferrer, director of contemporary art.

Brooklyn College Master of Fine Arts Open Studios. March 23–24. Both first- and second- year MFA students encourage visitors to experience their work and creative practice in the intimacy of their studios. The studios are located at Boylan Hall, 2900 Bedford Ave.

“Keith Haring: 1978-1982.” Through July 8. This is the first large-scale exhibition to explore the early career of one of the best-known American artists of the 20th century. 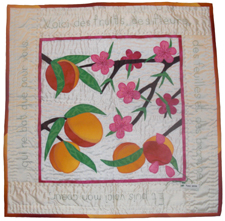 “Newspaper Fiction: The New York Journalism of Djuna Barnes, 1913-1919.” Through Aug. 19. An exploration of the early journalistic career of Barnes (1892-1982), an American writer and women’s rights advocate.

“Released with Conviction” by the Center for Employment Opportunities (CEO). Through April 28. This multimedia project follows nine former inmates after their release from incarceration. Photography by Jeyhoun Allebaugh, Michael Scott Berman and Bryan Tarnowski.

“Botanical Inspirations” by the Quilters’ Guild of Brooklyn. Through April 28.

“Crossing Continents: A Journey through Asia and Africa in Quilts” by Susan Sato & Myrah Brown Green. Through April 28.

Kathy Goodell: “Mesmer Eyes.” Through April 16. Goodell is a contemporary artist who works in sculptural objects, installation and drawing.

“The Influential Female: Drawings Inspired by Women in History.” Through March 25. The artists in this exhibition draw their inspiration from historic or specific female subjects to create fresh and challenging gender-related artwork.

Rahi Rezvani: “Unseen.” Through March 23. Focusing mainly on portrait photography, Rezvani’s work can best be described as a cross between film, photography and painting.

National Dance Theatre Company of Jamaica. March 24, at 8 p.m. Celebrating its 50th anniversary this year, NDTC blends the lore, music and dance of Jamaica, Africa and the American South with modern and classical forms. Founded by visionary artistic director Rex Nettleford, this jewel of the West Indies returns with two programs combining evocative new works with favorites from their repertoire and rarely performed pieces from early in the company’s history.

Terence Davies. Through March 27. British director Davies has a distinctive, noncommercial style and only seven films in his filmography.

“Shoah.” March 25. Twelve years in the making, Claude Lanzmann’s epic on the Holocaust features interviews with survivors, bystanders and perpetrators. Rewriting the rules of documentary filmmaking, Lanzmann used no archival footage in this film.

Brooklyn Close-Up: “We Own the Night.” March 26. James Gray directs this crime drama about two brothers from a Brooklyn family of cops. When Russian gangsters put out a hit on rising officer Joseph, club owner Bobby must choose sides.

Books into Film: “Clueless.” March 27, at 6:30 p.m. Despite her superficial demeanor, Beverly Hills high-schooler Cher is a witty and intelligent navigator of teenage social life. Amy Heckerling based her 1995 film on Jane Austen’s 1815 novel, Emma.

“Inventing Brooklyn: People, Places, Progress.” Through June 3. From Native American roots and Dutch-colonial influences to icons such as the Brooklyn Bridge and the Dodgers, this exhibition examines how various people, places and historical events have shaped the development of the borough.

Masterworks Series: “A celebration of Ysaye and the composers he inspired.” March 22, at 8 p.m. Works by César Franck, Guillaume Lekeu, and Eugene Ysaye. With Michael Guttman, violin, and Richard Raymond, piano.

The Modern Wind Symphony Concert: The Brooklyn Wind Symphony’s Tribute to John Barnes Chance. March 24, at 2 p.m. This concert is an homage to composers who create works that explore the full artistic spectrum of the wind band medium. For more information, visit www.brooklynwindsymphony.org.

The Sounds of Spring. March 23, at 8 p.m. and March 25, at 4 p.m. Pianist Eleonor Bindman and violinist Robert Chausow perform Beethoven’s Sonata #5 for Violin and Piano in F. Major, Op. 24, “Spring”; Grieg — selections from Lyric Pieces for piano, and Sonata #3 for Violin and Piano. “‘Tis Pity She’s a Whore.” Through March 31. Written by John Ford; performed by Cheek by Jowl; and directed by Declan Donnellan. In this controversial piece, siblings Giovanni and Annabella are of noble birth and madly in love. Religion, morality, and madness collide as the brother and sister’s terrible secret is revealed.

“Monkeys.” March 23-31. Three friends who can’t stand each other yet can’t function without each other spend all night — just as they do every night — in a 24-hour coffee shop that serves as both a haven and a prison. Nosedive Productions and The Impetuous Theater Group stage the debut absurdist comedy.

Nick Silver’s “The Altruists.” March 22–25. A Thesis Production directed by Josh Penzell. This hilariously jaundiced tale of romance and politics focuses on a group of hopelessly self-centered protesters and the people who love them.

Guerrilla Girls. March 29, at 7 p.m. Iconic feminist group the Guerrilla Girls presents an interactive, multimedia performance that illustrates their history of using art and action to expose and critique discrimination, using examples from the newly released edition of their Art Museum Activity Book.

“A Raisin in the Sun.” Through April 1. Written by Lorraine Hansberry, this groundbreaking play set on Chicago’s South Side revolves around the divergent dreams and conflicts within three generations of the Younger family.

“Another Life.” Through March 24, at 7 and 7:30 p.m. Written and directed by Karen Malpede and starring four-time Obie Award winner George Barteneiff, this play tells of a mogul and his physician daughter who become embedded in the war on terror as they grapple with questions of torture and human rights. Each evening the audience will share a dialogue with a speaker — a human rights activist, lawyer or author — as part of “A Festival of Conscience.”

“Cinderella.” March 24, at 2 and 7 p.m. A family-fest for the young and old, Cinderella is the story of a girl whose inner beauty and kind character shines through despite deprivation, cruelty and loneliness. CBT’s 10-member company will be supported by members of the CBT Junior Company and Dance Academy in this retelling of the classic fairytale, the company’s first full-length ballet.

“Fires in the Mirror.” March 27–31. This play by Anna Deavere Smith chronicles the response to the Crown Heights tragedy of 1991, when a car containing a Jewish religious leader accidentally struck and killed a 7-year-old black boy. Racial tensions exploded between the two groups, leading to a string of violence and a civil law suit.

ST. ANN & THE HOLY TRINITY CHURCH: Located at the corner of Montague and Clinton streets, Brooklyn Heights. (718) 875-6960 or www.saintan nandtheholytrinity.org.

“Clara and Mr. Tiffany,” with Author Susan Vreeland. March 24, at 1 p.m. The latest novel by Vreeland was inspired by the story of the real artist behind the iconic lamps of Green-Wood resident Louis Comfort Tiffany. Set against the Gilded Age world of formal balls and opera as well as the immigrant poverty of the Lower East Side, Vreeland’s novel imagines the life of the artistic and progressive Clara Driscoll, director of the Tiffany Studios’ Women’s Glass Cutting Department (the “Tiffany Girls”), in New York City.