Nicola Ginzel & Chester Nielsen. Through March 18. This show features artists whose process is both visible and coherent.

“From Caruso to Cunningham.” Through August. A special archival exhibition delving into BAM’s rich history, a century and a half in the making. Original documents, archival video, photographs and more illuminate the moments, memories and cultural happenings that have transpired both on and off its stages. Curator David Harper and archivist Sharon Lehner co-curate this free exhibition, open to the public in the lobby of the BAM Peter Jay Sharp Building.

Keith Haring: 1978–1982. March 16–July 8. This is the first large-scale exhibition to explore the early career of one of the best-known American artists of the 20th century.

“Playing House.” Through Aug. 26. “Playing House” is the first in a series of installations that aim to engage visitors with the Brooklyn Museum’s period rooms. Artists Betty Woodman, Anne Chu, Ann Agee and Mary Lucier have been invited to place site-specific artwork in eight of the museum’s historic rooms, which have been interpreted by curators over the years to illustrate how Americans of various times, economic levels, and locations lived. The artists were asked to consider these factors when developing their ideas.

“Rachel Kneebone: Regarding Rodin.” Through Aug. 12. This exhibition features 15 iconic works by 19th-century French master Auguste Rodin, selected from the museum’s collection by British artist Rachel Kneebone and shown alongside eight of her own large-scale porcelain sculptures.

“Raw/Cooked”: Shura Chernozatonskaya. Through April 8. The third exhibition in the “Raw/Cooked” series features the work of Red Hook-based artist Shura Chernozatonskaya. For her Brooklyn Museum presentation, she has created two site-specific painting installations. The first consists of 33 canvases combined to create one large-scale work. Each canvas features a composition of circles, evoking traffic lights, dominoes and the rhythms of Latin music. The second installation draws inspiration from the nearby European paintings collection.

“Released with Conviction” by the Center for Employment Opportunities (CEO). Through April 28. This multimedia project follows nine former inmates after their release from incarceration. Photography by Jeyhoun Allebaugh, Michael Scott Berman and Bryan Tarnowski.

“Botanical Inspirations” by the Quilters’ Guild of Brooklyn. Through April 28.

“Crossing Continents: A Journey through Asia and Africa in Quilts” by Susan Sato & Myrah Brown Green. Through April 28.

“Ballons and Barbed Wire.” Through May 10. Sculpture by Musa Hixson.

“The Influential Female: Drawings Inspired by Women in History.” Through March 25. The artists in this exhibition draw their inspiration from historic or specific female subjects to create fresh and challenging gender-related artwork.

Michelle Handelman: “Rehearsal for a Vamp (work-in-progress).” Through March 18. An installation of Handelman’s latest video project, “Irma Vep, the last breath,” a multiscreen project based on Musidora, the French silent film actress who played the character Irma Vep in the film “Les Vampires” (1915).

“Systemic Risk.” Through March 16. Group exhibition curated by Jonathan Durham. In financial terms, systemic risk refers to a domino effect of cascading failures, leading to the total, irreversible collapse of an entire system or market. The artists in this exhibition work to point to phenomenological behavior, inequality, misperception, and in some cases, complete lack of understanding.

Quinn’s site-specific wall installation, “LaceMath,” is based on a piece of 17th century Italian lace.

Open Studios. March 17 and 18. An opportunity for the public to enter the private studios of and meet Smack Mellon’s 2011–2012 fellowship artists and work exchange artist.

Rahi Rezvani: “Unseen.” Through March 23. Focusing mainly on portrait photography, Rezvani’s work can best be described as a cross between film, photography and painting.

Stars of the Russian Ballet: “The Sleeping Beauty Act III Pas de Deux.” March 18, at 3 p.m. This outstanding company of dancers has been trained in the rigorous and exacting classical technique of the official ballet academies of the Mariinsky Ballet, the Bolshoi Ballet, and the Tchaikovsky Perm Ballet. This performance features music by Pyotr Ilyich Tchaikovsky and choreography by Marius Petipa.

“Puss in Boots.” Through April 7, at 12:30 and 2:30 p.m. Charles Perrault’s 1697 French tale of a remarkable cat, adapted for the marionette stage by artistic director Nicolas Coppola.

Terence Davies. March 15 and 21–27. British director Davies has a distinctive, non-commercial style and only seven films in his filmography. His work is a personal exploration of memory, time, internal and external repression, childhood, religion, and alienation. BAM presents this series on the occasion of his latest film, “The Deep Blue Sea,” an adaptation of Terence Rattigan’s play set in postwar London.

Screening: “Miss Representation.” March 15, at 7 p.m. This film examines the role that mainstream media plays in women’s underrepresentation in positions of power and influence.

Screening: “Back Walking Forward.” March 18, at 2 p.m. A moving documentary about an active young man suddenly bound to a wheelchair following a car accident.

“Context/Contrast: New Architecture in Historic Districts 1967 to Present.” Through April 29.

“Inventing Brooklyn: People, Places, Progress.” Through June 3. From Native American roots and Dutch-colonial influences to icons such as the Brooklyn Bridge and the Dodgers, this exhibition examines how various people, places and historical events have shaped the development of the borough.

Double Dublin! March 18, at 1:30 p.m. Kevin Holohan and Honor Molloy present this evening of Irish comic writing. Holohan reads from The Brothers’ Lot, a satirical novel that explores religious hypocrisy in an Irish school. Molloy reads from “Smarty Girl — Dublin Savage,” the story of a wild child’s struggle to hold her family together in 1960s Dublin.

Kafka in Context: A Book Discussion Series. March 21, at 2 p.m. Acclaimed novelist Matthew Sharpe leads a three-part discussion series on the work of Franz Kafka., which explores several of Franz Kafka’s works in historical context and beyond. For the first session, be prepared to discuss “The Trial.”

Rebecca Jordan. March 17, at 9 p.m. Jordan is a New York singer-songwriter with a delicate voice and a knack for weaving it into enticing acoustic textures.

Bargemix Series. March 17, at 8 p.m. A St. Patrick’s Day celebration, with Celtic world music artist Ashley Davis in an evening of song and stories. For more about Ashley and to hear clips of her music, visit www.daisyrings.com.

“The Time is Always Right: A Century of Black Music in America.” March 16, at 10:15 a.m. and noon. Featuring the Brooklyn High School for the Arts Choir and the renowned tap dancers from Divine Rhythm Productions, this program will explore nearly a century of music by black composers. Performance takes place at the Brooklyn Center for the Performing Arts, Brooklyn College, 2900 Campus Road, Midwood. For more information, call (718) 488-7012.

Brooklyn Chamber Music Society Concert. March 16, at 8 p.m. On the program are Beethoven’s string quartet in B flat major, Op. 130, and Brahms’ Quintet for piano and strings in F minor, Op. 34. For reservations or more information, call (718) 858-0718 or visit www.brooklynchambermusicsociety.org 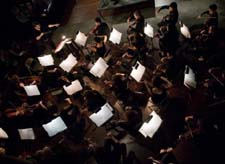 Eminent Irish of Green-Wood Walking tour. March 18, at 1 p.m. Join Green-Wood Historic Fund guide Ruth Edebohls as she leads a post-St. Patrick’s Day tour featuring the eminent Irish throughout history for whom the cemetery is their final resting place.

“‘Tis Pity She’s a Whore.” March 20–31. Written by John Ford; performed by Cheek by Jowl; and directed by Declan Donnellan. In this controversial piece, siblings Giovanni and Annabella are of noble birth and madly in love. Religion, morality and madness collide as the brother and sister’s terrible secret is revealed.

“The House of Fitzcarraldo.” Through March 17. “Fitzcarraldo” is a 1982 film written and directed by Werner Herzog and starring Klaus Kinski as the title character. It portrays would-be rubber baron Brian Sweeney Fitzgerald, an Irishman known as Fitzcarraldo in Peru, who has to pull a steamship over a steep hill in order to access a rich rubber territory. Buran Theatre Company’s “The House of Fitzcarraldo” is a highly theatrical performance work in which the performers, taking on the role of the Collective Ego of Herzog and Kinski, ponder the significance of dreams and the insanity one must invest in pursuing the useless conquest of unconscious wishes.

“A Raisin in the Sun.” March 17–April 1. Written by Lorraine Hansberry, this groundbreaking play set on Chicago’s South Side revolves around the divergent dreams and conflicts within three generations of the Younger family.

“Another Life.” Through March 24, at 7 and 7:30 p.m. Written and directed by Karen Malpede and starring four-time Obie Award winner George Barteneiff, this play tells of a mogul and his physician daughter who become embedded in the war on terror as they grapple with questions of torture and human rights. Each evening the audience will share a dialogue with a speaker — a human rights activist, lawyer, or author — as part of “A Festival of Conscience.”