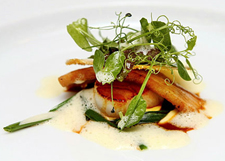 Appeasing the covetous stares of Manhattan real estate brokers and foodies alike, Moe Issa, Brooklyn Fare’s owner, has signed a lease on an 11,000-square-foot space on 39th Street between Ninth and 10th avenues, according to The Wall Street Journal.

The space, most of which will be devoted to a supermarket, also has an outdoor terrace and an additional 7,000 square feet in the basement.

The new location will include a 60-seat restaurant and a 10-seat chef’s table, similar to the one at the original, in the basement.

As for Issa’s loyalty to his Kings County roots as he expands his empire, there’s nothing to worry about: The new iteration is called “Brooklyn Fare.”